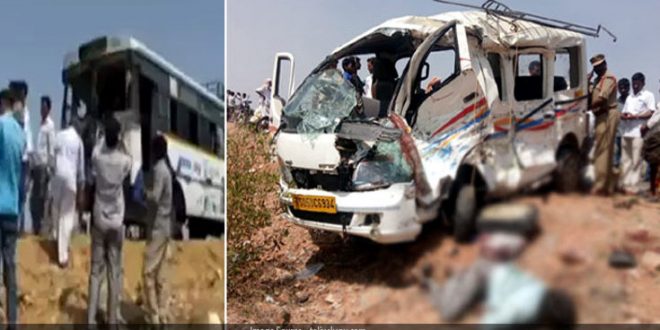 Nalgonda, March 6 (PMI): Seven persons were killed and 15 others were grievously injured when a Bolero rammed an RTC bus at Devathupalli village under Kondamallepally mandal in the district on Wednesday.

According to the information, while the ill-fated Bolero was proceeding from Deverakonda towards Hyderabad, one of its tyres got burst at Chennaram and rammed the RTC bus coming from the opposite direction as the driver lost control on the vehicle. With this, seven occupants of Bolero were killed on the spot and 15 commuters of the RTC bus were grievously injured.

The injured bus commuters were rushed to the government general hospital at Deverakonda. On receipt of the information, the local police rushed to the spot and started securing details of the deceased and the injured.

Chief Minister K Chandrashekhar Rao has expressed shock over the tragic road accident in Nalgonda District on Wednesday. The CM conveyed his condolences to the members of bereaved families. The CM instructed the officials concerned to provide better treatment to the injured. (PMI)