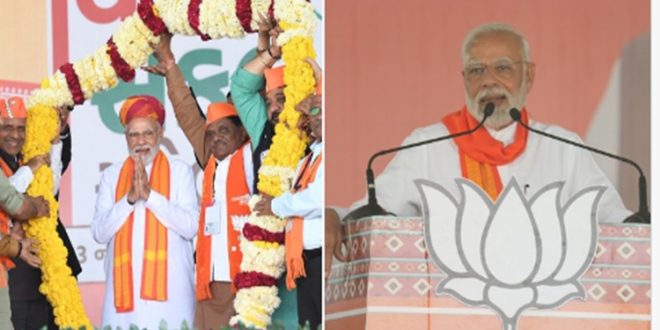 Gujrat;In Gujarat assembly election, all political parties are putting in  their might to woo the voters.  Senior BJP leader and Prime Minister Narendra Modi on Wednesday addressed four public meetings in the state. Addressing the Vijay Sankalp rally in tribal-dominated Dahod, Mr. Modi said that BJP works with the spirit of service.

He said that Congress had been in power many times but it did not care for the development of tribes. Shri Modi said that for the first time in the country, a message has been sent to the whole world by electing a tribal woman the President. He said that on such occasions, the opposition should unite, but Congress tried its best to defeat her.

He said that both Gujarat and the country are progressing rapidly and BJP is laying emphasis on comprehensive development of all sections of the society. This is the reason that along with the cities, now basic facilities are reaching the villages as well and rapid development is taking place. Mr. Modi also addressed election meetings in Mehsana, Vadodara and Bhavnagar on Wednesday.

Addressing an election rally in Vadodara this evening the Prime Minister said that the country is making rapid progress on the economic front and has become the fifth largest economy in the world.

Along with this, due to the steps taken in the government we have reached the eighth position in the ecology front. The Prime Minister said that Gujarat has developed in the last 20 years by solving many problems. But in the last eight years, due to the double engine Sarkar, the development has intensified further. Shri Modi said that Gujarat has been enraged as  a manufacturing hub. Despite the absence of coal and other resources, Gujarat is an electricity surplus state. Shri Modi also addressed election meetings in Mehsana and Bhavnagar today.

While addressing a public meeting in SurendraNagar, BJP leader and Home Minister Amit Shah has said that the Congress gave the slogan of Garibi Hatao, but did not make any effort to alleviate poverty. He said that Prime Minister Modi changed the political culture and took development and nationalism forward.  BJP National President J. P. Nadda today held election meetings in Gadhda and Junagadh while Uttar Pradesh Chief Minister Yogi Adityanath held rallies in Dwarka, Rapar and Morbi.

On the other hand, many Congress leaders are also campaigning for the party candidates. Senior party leader Manish Tiwari, while addressing a public meeting in Ahmedabad today, criticized the policies of the BJP governments in the state and at the Centre. Party state President Jagdish Thakor today campaigned in favor of party candidates at Banaskantha, Deesa and other places. On the other hand, on behalf of the Aam Aadmi party, Punjab Chief Minister Bhagwant Maan held road shows at four places in South Gujarat while senior leader Raghav Chadha led a road show in Modasa.

AIR correspondent reports that, in the election campaign, the leaders of the Bharatiya Janata Party are mainly talking about the big development works done by the central and state government, the steps taken for the security of the country and nationalism. Along with this, the party leaders are trying to woo the voters by comparing the working style of their party and the opposition.

On the other hand, the Congress leaders are seeking votes by reminding them of the works done by their party’s government 27 years ago. The party leaders are also hitting out the state and the central governments. Leaders of Aam Aadmi Party are talking about the works done in Delhi and Punjab and appealing the voters to vote for the party. Meanwhile, other parties and independent candidates are trying to gain public support on local issues.