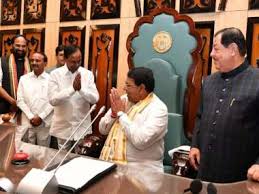 Recalling his association with Pocharam Srinivas Reddy, the Chief Minister said Pocharam started his political career in 1977 as Nizamabad DCCB Chairman and discharged several responsibilities, including cabinet minister. KCR said the stint of Pocharam as Agriculture minister in his government would be remembered by one and all. He said Pocharam was responsible for the successful launch and implementation of farmer welfare schemes like Rythu Bandhu and Rythu Bhima and Machination schemes in the State.

The Chief Minister said the Rythu Bandhu scheme received appreciation even from the United Nations and several State governments were keen on implementing the scheme in their States. He said the Chief Minister of Odisha had openly stated that they were implementing the scheme there.  KCR also said Pocharam had participated in the 1969 separate Telangana State agitation as a student leader. He said Pohcharam had sacrificed his medical engineering degree at the Osmania University as he was harassed and kept in the Saifabad police station by the then rulers. KCR said he often calls Srinivas Reddy as ‘Laxmi Putrudu’ for his proactive role in ensuring the growth of the farmers and the agriculture sector of the State. The Chief Minister hoped that Pocharam would bring good name to the institution of Speaker in the entire country.

Congress MLA Gandra Venkata Ramana Reddy heaping praises on the Speaker said Pocharam was an embodiment of a true leader. He urged the Speaker to give adequate opportunity to the Opposition MLAs to raise the public problems in the House. MIM leader Ahmed Bin Abdullah Balala said the new Speaker would succeed in running the House smoothly.

Later, all political party leaders spoke in the House and congratulated the newly elected Speaker. He is the second Assembly Speaker from Nizamabad. TRS leader Suresh Reddy was the first Speaker of the Assembly from the district. However, Pocharam was the first Speaker from the district after the creation of separate Telangana State. He represents the Banswada assembly segment.

Pocharam began his political career in the year 1976. He was first elected as the chairman of Desaipet Single Window in the year 1977. He then served as the chairman of the DCCB in the undivided Nizamabad district in 1987. He won as an MLA for the first time in 1994 from the Banswada Assembly constituency on a TDP ticket. Later, he became Housing Minister in 1998. In the 1999 elections, Pocharam registered his second successive win from the same Banswada and discharged his duties as minister for Panchayat Raj, Mines and Water Resources However, Srinivas Reddy lost election in 2004, but bounded back in 2009 by winning the Assembly elections from the same seat. In the year 2011, Pocharam resigned from the TDP and his MLA post and joined the ruling Telangana Rashtra Samiti. He was re-elected to the Assembly for the fourth time in the by-elections held for the seat after his resignation as the TRS party candidate. He did not look back later and actively took part in the separate Telangana State agitation. He won the seat for the fifth time in the 2014 Assembly elections. (PMI)