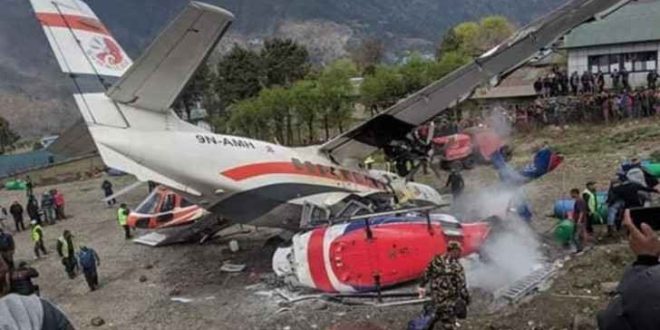 Plane with 72 people on board crashes in Nepal

KATHMANDU: At least 44 people have been killed after an aircraft carrying 72 people crashed in Nepal. 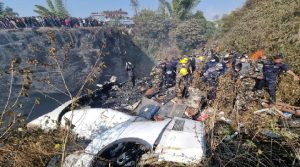 The plane was flying from the capital Kathmandu to Pokhara on Sunday when it crashed. Pokhara is a bustling tourist town about 200km (124 miles) west of Kathmandu.

Nepal Police Spokesperson, Tek Prasad Rai, told Al Jazeera that the death toll has gone up to 44, adding that no survivors have been found so far.

“Thirty bodies have been recovered and sent to hospital,” Niroula told Reuters news agency. “Another 14 bodies are still lying at the crash site and authorities are bringing in a crane to move them.”

Local television showed thick black smoke billowing from the crash site as rescue workers and crowds of people gathered around the wreckage of the aircraft. 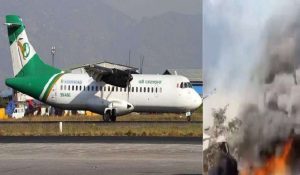 “Responders have already reached there and trying to douse the fire. All agencies are now focused on first dousing the fire and rescuing the passengers,” local official Gurudutta Dhakal said.

The craft made contact with the airport from Seti Gorge at 10:50am (05:05 GMT), the aviation authority said in a statement. “Then it crashed.”

“Half of the plane is on the hillside,” said Arun Tamu, a local resident, who told Reuters he reached the site minutes after the plane went down.

“The other half has fallen into the gorge of the Seti River.”

Speaking to Al Jazeera from Kathmandu, Ramyata Limbu said locals in Pokhara asserted weather and visibility was “good” when the plane crashed.

“So its [the crash] shocking and surprising,” said Limbu. “Eyewitnesses said the plane was having problems before it crashed into a gorge close to the airport.” 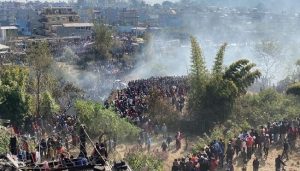 “I am deeply saddened by the sad and tragic accident of Yeti Airlines ANC ATR 72 which was flying from Kathmandu to Pokhara with passengers,” he posted on Twitter.

“I sincerely appeal to the security personnel, all agencies of the Nepal government and the general public to start an effective rescue.”

A committee to investigate the crash has been formed by the government.

The crash is Nepal’s deadliest since March 2018, when a US-Bangla Dash 8 turboprop flight from Dhaka crashed on landing in Kathmandu, killing 51 of the 71 people on board, according to Aviation Safety Network.

In May, a plane owned by Tara Air crashed less than 20 minutes after taking off from Pokhara.

At least 309 people have died since 2000 in plane or helicopter crashes in Nepal home to eight of the world’s 14 highest mountains, including Everest where the weather can change suddenly and make for hazardous conditions. (Int’l Monitoring Desk)