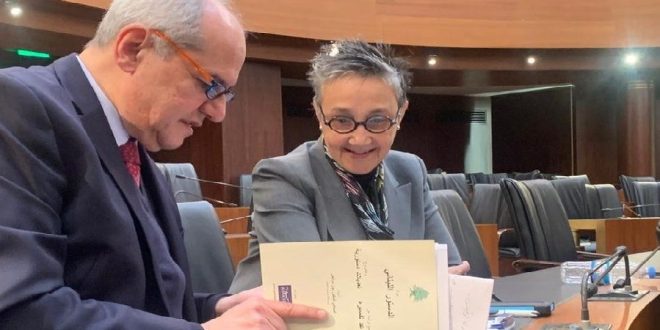 Lebanon MPs sit in as 11th vote for president fails

BEIRUT: Two politicians have spent the night inside Lebanon’s parliament building in protest at MPs’ failure to elect a new president for the 11th time. 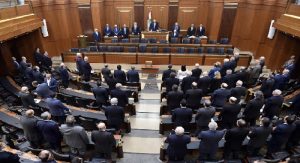 Najat Saliba and Melhem Khalaf refused to leave the chamber after the latest round of voting, spending the night inside the darkened building.

The outgoing president’s term expired on 31 October and a replacement should have been voted in before he left but Lebanon’s various sectarian parties have still not agreed on a successor.

“No-one tried to remove us,” Najat Saliba told media. “On the contrary, the parliament staff were very helpful and even opened meeting rooms for us in addition to the General Assembly hall.

“We spent the night without electricity, because it shuts down every day at 14:30 (12:30 GMT). But we received a lot of food from various people and other MPs who visited.”

Saliba and Khalaf – both from the Forces of Change bloc who entered parliament at the last election – say their sit-in will continue until a new president is finally agreed upon. They want fellow MPs to come and meet them to discuss potential candidates. 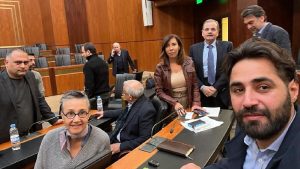 “This is our duty,” Saliba continued. “Nothing in the constitution is working. The political system in Lebanon is in a state of gridlock and the walls between the parties are becoming thicker. We have no choice but to sit down and talk to destroy these walls that keep warlords in power.”

So far, each of the 11 electoral sessions to appoint a successor to former President Michel Aoun has ended in failure.

In the latest parliamentary session, the most popular candidate, Michel Moawad, received just 34 votes, far fewer than the 86 needed to move to a second round. Thirty-seven MPs cast blank ballots and several others used their papers to make a protest. One even cast a vote for the US senator Bernie Sanders.

The power vacuum in Lebanon also extends to the government. The country has only had a caretaker administration in place since national elections in May last year.

The main parties failed to agree on a new coalition, so the previous cabinet continued in their jobs until a solution could be found but without an official mandate, the government is unable to move ahead on dealing with Lebanon’s crippling economic crisis. 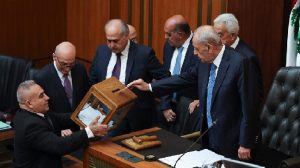 As MPs once again failed to break the presidential deadlock, Lebanon’s currency reached a new record low. Fifty thousand Lebanese lira are now worth just $1 on the country’s parallel market, or black market.

For years, the exchange rate stood at a steady 1,500 lira to the dollar. The plunging currency has made basic items such as food and fuel increasingly unaffordable and left an estimated 80% of the Lebanese population living in poverty.

Lebanese banks will remain shut “indefinitely” due to a lack of security protection by authorities, say their association.

The announcement by the Association of Lebanese Banks follows a string of raids by customers demanding access to frozen savings last week.

It said their employees faced risks which had not been mitigated.

A woman armed with a toy gun staged a hold-up at a bank on Wednesday to pay for family medical bills.

There have since been other copycat raids, with reports of at least five last Friday.

Lebanon is in a severe economic crisis, with more than 80% of the population struggling to afford food and medicine. (Int’l Monitoring Desk)