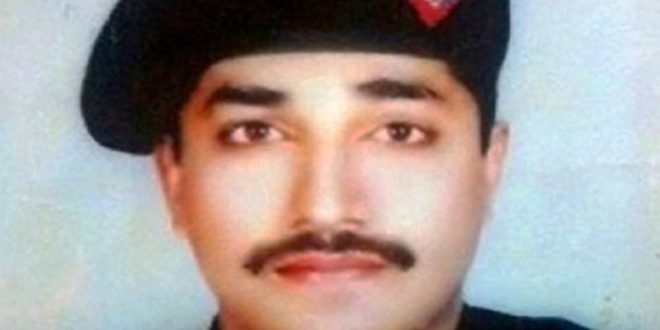 Chief Justice Saqib Nisar on Saturday took notice of media reports regarding the scheduled execution of Khizer Hayat, a mentally ill prisoner on death row, and announced to suspend his sentence till further orders.

Moreover, the chief justice also fixed the matter for hearing on Monday [January 14].

Earlier in the day, Hayat’s mother Iqbal Bano had moved the court calling for the suspension of his death sentence on the grounds of mental illness.

On Friday, a district and sessions judge in Lahore had scheduled the execution of Hayat — a death-row prisoner diagnosed with paranoid schizophrenia — for January 15 at the central jail in Kot Lakhpat.ARTICLE CONTINUES AFTER AD

The request filed by Hayat’s mother, which was submitted before the court’s human rights cell, was reviewed by Chief Justice Nisar. The petition called for the Supreme Court’s attention to the fact that a mentally ill prisoner was being sentenced to death.

It has stated that the judgment passed by Lahore High Court “is not in accordance with law and the Prison Rules”.

The petition has also argued that the court has “mixed the conviction with execution and thereby has dismissed the writ petition on wrong premises”.

It further argues that neither the medical history of the petitioner’s son has been taken into account and nor have the medical board’s reports been considered which establish the prisoner’s ailment.

Moreover, the petition has also stated: “There is no way that Khizar Hayat’s execution can be carried out in a manner that complies with Pakistan’s obligations under the International Covenant on Civil and Political Rights, and the UN Convention against Torture.”

Hayat was sentenced to death in 2003 over the shooting of a fellow police officer. He has spent nearly 15 years on death row. He was first diagnosed as a schizophrenic in 2008 by jail medical authorities. In 2010, the jail medical officer recommended that Hayat needed specialised treatment and should be shifted to the psychiatric facility. However, this was never done.

In 2017, the Lahore High Court had stayed the execution of Hayat.

Hayat’s mother, in a letter, requested the chief justice to visit Kot Lakhpat jail’s ward for mentally ill prisoners and investigate what medicines were being given to her son.

She pleaded that his medical records be investigated “to determine why his treatment was not being done properly and why his condition was worsening day by day”.

“I read in Dawn that a prisoner named Khizar Hayat has been sentenced to be hanged,” the chief justice remarked, inquiring from the Punjab attorney general which jail Hayat was serving his sentence in. The official replied it was Lahore’s Kot Lakhpat jail.

Justice Nisar asked that it be immediately ascertained if Hayat has been diagnosed as mentally ill and sought a report today.

Meanwhile, Justice Project Pakistan (JPP), which has been contesting the case, has been running a campaign on social media, asking President Arif Alvi to “grant mercy” to Hayat. According to Article 45 of the Constitution, the president has the “power to grant pardon, reprieve and respite, and to remit, suspend or commute any sentence passed by any court, tribunal or other authority”.

Earlier on Saturday, a press conference was organised by the Pakistan Psychiatric Society to call to attention the prisoner’s execution.

“All medical officers who have examined Khizar Hayat over the years have found him to be actively exhibiting schizophrenic symptoms,” said Dr Usman Ahmad Hotiana of the Pakistan Psychiatric Society. “In 2009, Khizar’s mental illness got so severe that he got horribly beaten by his fellow prisoners. His injuries were severe enough to require surgeries. After that, he was put in solitary confinement.”