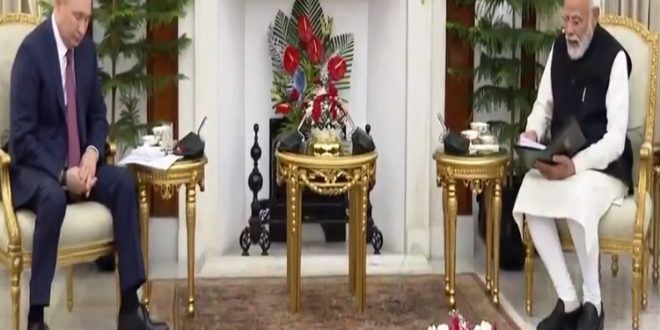 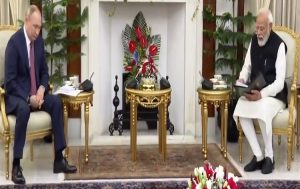 NewDelhi; Dec 6;2021–The 21st India Russia Annual Summit between Prime Minister Narendra Modi and Russian President Vladimir Putin is underway at Hyderabad House in New Delhi. Mr Putin arrived in New Delhi earlier this evening on an official visit for the Annual Summit.
In his opening remarks,  Mr Modi said India’s special and strategic partnership with Russia has continued to strengthen despite  the COVID pandemic. He said both countries cooperated strongly during the pandemic – from vaccine trials and production, assistance to returning nationals to respective nations. Mr Modi pointed out that in the last few decades, several fundamentals have changed and new geopolitical angles have emerged. He asserted that amidst all such variables, Indo-Russian friendship has been constant. He said both countries have assisted each other and also taken care of each other’s sensitivities.

The Prime Minister said the first 22 dialogue between defence and foreign ministers which took place earlier today starts a new mechanism to improve behavioural cooperation. He also said they have been in constant touch on Afghanistan and other regional issues.
Mr Modi stated that they are adopting a long-term vision to strengthen bilateral partnership in economic affairs. He highlighted that that they have set a target of trade worth 30 billion dollars and investment worth 50 billion dollars by 2025.

The Prime Minister said that under Make In India, co-development and co-production are strengthening India Russia partnership in the defence sector. He said they are also heading closer in cooperation in space and civil nuclear sectors.

In his statement,  Russian President Vladimir Putin said his country perceives India as a great power, a friendly nation, and a time-tested friend. He said the relations between the two nations are growing and he is looking into the future.

Meanwhile,  the first ever India Russia 22 Ministerial Dialogue was held in New Delhi this afternoon. Defence Minister Rajnath Singh and External Affairs Minister Dr. S Jaishankar represented the Indian side in the 22 Dialogue and the Russian side was represented by their Foreign Affairs Minister and Defence Minister.
Dr Jaishankar said in a tweet after the meeting that there was a productive exchange of perspectives on cross cutting and inter related issues. He had said in his opening remarks that they meeting at a critical juncture in the global geopolitical environment which is in great flux, especially in the aftermath of the Covid-19 pandemic. He further stated that as close friends and strategic partners, India and Russia have been working together to safeguard common interests and to ensure peace, progress and prosperity for the people.

He added that India Russia ties have been close and time-tested and exceptionally steady. He said both nations have had an active dialogue at political levels and also a strong defence partnership over many years.
In his opening remarks at the Dialogue, Defence Minister Rajnath Singh termed it as a historic day in bilateral relations. He said India Russia defence cooperation have progressed in an unprecedented manner in recent times. He said India’s development needs are colossal and its defence challenges are legitimate, real and immediate. He added that India seeks partners that are sensitive and responsive towards its expectations and requirements. He hoped that Russia will remain a major partner for India.

Ahead of the Dialogue, Dr Jaishankar held a meeting with Russian Foreign Affairs Minister Sergey Lavrov this morning. Dr Jaishankar underlined that they are very satisfied with the  bilateral relations and state of cooperation. He said India Russia  partnership is very special and unique.

At the same time, Defence Minister Rajnath Singh and his Russian counterpart Sergei Shoigu attended the 20th meeting of India-Russia Inter-Governmental Commission on Military and Military Technical Cooperation. Mr  Rajnath Singh termed Russia as India’s long-standing special and privileged strategic partner and said that the relations were time-tested and based on common interests in multilateralism, global peace and prosperity, mutual understanding and trust. He appreciated Russia’s strong support for India and stressed that the close cooperation is not targeted against another country. He expressed hope that this cooperation will bring peace, prosperity and stability in the region. Four agreements were signed after this meeting, including contract for procurement of over six lakh AK-203 Assault Rifles and agreement on Program for Military Technical Cooperation from 2021 to 2031.