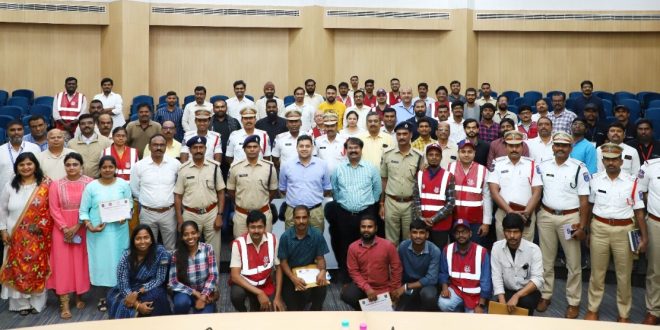 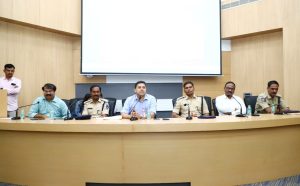 Hyderabad;Dec 14;2022-(PMI) Today, SCSC &  Cyberabad Police Commissionerate, together  have felicitated the Best traffic volunteers who have been supporting Cyberabad Traffic Police, during the past 4 months.

SCSC, along with Traffic Police  have  introduced the concept of Traffic Volunteers in the year 2013 with the  volunteers enrolled from the IT Industry, to support the traffic police for  controlling  the ever growing traffic in the IT corridor.   Gradually, we have volunteers from Pharma and Health Sciences, and other industries including Self employed youth, housewives and citizens joining in from various walks of life to do their bit for the busy traffic junctions of Cyberabad. 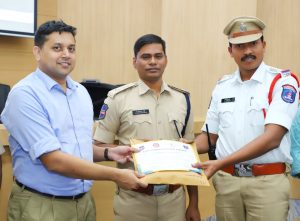 Mr Krishna Yedula, Secretary General,  SCSC  said “ SCSC has taken several successful initiatives since 2006 for the safety and security of the IT industry and  the Traffic Volunteers is one of the first few initiatives taken up by SCSC, way back in 2013 – What has started off as a trickle then, now it has become a regular activity of SCSC Traffic Forum.  Initially, these traffic volunteers used to support Traffic police only during regular traffic hours and now I am happy to share that they became a regular volunteer force for any kind of drive by Cyberabad Police – that includes supporting the traffic police during Drunken drivers on weekends, capturing violations by motorists on a regular basis & being a good Samaritan for accident victims”.  It is a tough job, but SCSC truly appreciates our traffic volunteers’ passion and commitment towards traffic safety and hope to have more and more people from all walks of life joining as volunteers”.  Today, we are rewarding, 5 types of volunteers, who have contributed for the following causes between 1st August to  30th Nov  2022. 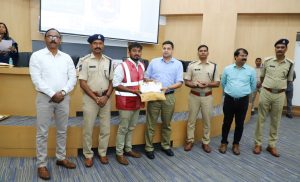 Addressing the gathering, DCP T Srinivasa Rao, IPS  said that “Traffic volunteers is a good concept and I was quiet impressed with some of the work done by the Traffic Volunteers, on  a regular basis, with passion. I  urge people from all walks of life, like housewives, students , employees working in various companies to come and support this unique initiative.

Speaking at the event, Mr Sriniwas, Traffic Forum Leader said “around 8200 traffic violations have been captured and 6100 have been sent the challans.  Around 5500 hours of traffic volunteering work has been done and I urge more and more people to join this voluntary movement”.

One of the highlight of today’s evening function was one of the SHOs Traffic, Mr Srinath, was also facilitated by the Jt Commissioner, who personally has done first aid to a accident victim family and rushed them to nearest hospital: This act was well appreciated by all.

Jt Commissioner of Police, Mr Avinash Mohanty  IPS  said “The traffic volunteer initiative taken up by SCSC and our Traffic police  has stood the test of time –  It started off when I was DCP Traffic at Cyberabad and nice to see that it has become a good movement and we need to spread the word around the good work done by the volunteers, so that fresh blood comes to traffic volunteers” Our Traffic police is committed to train the volunteers and make this force a large one”.

Anyone, who wants to become a traffic volunteer can send an email to ad@scsc.in or call 9177283831. (Press media of india)