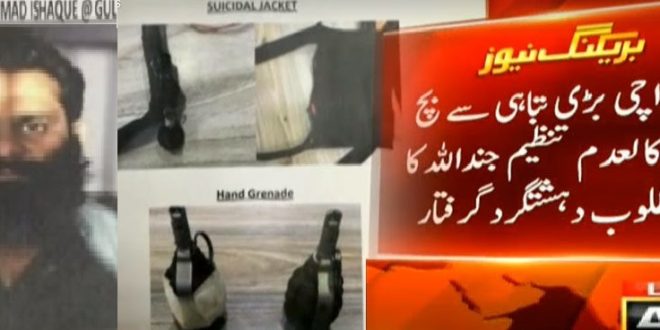 Arrested terrorist Mohammad Ishaq alias Gul was named in the red book, police have recovered a suicide jacket and a hand grenade from his possession.

According to the CTD Chief, the alleged terrorist had entered in Balochistan from Afghanistan and then arrived in the interior of Sindh. He had come to Karachi for a major terrorist attack in the metropolis; he was wanted to police in a number of cases, Ishaq alias Gul was a neighbour of Ataur Rehman alias Naeem Bukhari of banned Lashkar-e-Jhangvi (LeJ) terrorist group, Umar Khattab told the media.

Accused Ishaq was involved in two explosions outside a hotel of Karachi and fled to Afghanistan after a police encounter in 2008, scores of his accomplices were killed in encounters or arrested by the police, Umar concluded.

Jundullah is the terrorist group who was involved in an attack on Corps Commander Karachi on June 11, 2004.

As many as 11 people were killed and 12 others were injured when a convoy of the Corps Commander of Karachi was ambushed near the Clifton Bridge. Lt-Gen Ahsan Saleem Hayat and his convoy came under heavy fire as they approached the bridge on their way to the corps headquarters.

According to sources, the accused Ishaq had join banned Jindullah Group in the year 2006 and went Afghanistan to get training of terrorism and supervised terror actions in Pakistan especially in Karachi from Afghanistan including the sectarian violence, Shia target killing and kidnappings for ransom of opponent religious sect, collection of extortion money, bomb blasts and many other heinous crimes and terror activities during the last 12 years.Sources also claimed that some sensational details will be uncovered during the interrogation and most important and needed information would also be uncovered particularly in continuation of thousands of Shia missing persons, their target killings and the bomb blast during Majalis and processions.