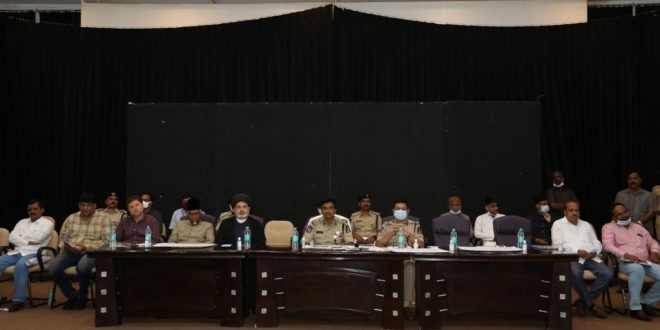 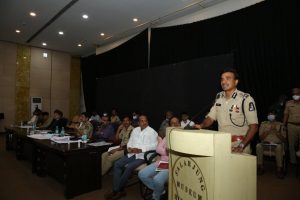 Newslines 29th July 2022: Muharram coordination meeting was held in view of “Yaum-e-Ashura’ to be observed on 10th Muharram 1443 Hijri corresponding to August 9th, 2022, called by City Police Commissioner Mr.CV Anand with Shia community members at Salarjung Museum on 28th July 2022 i.e., 28th Zilhij 1443H and took their opinions on the security & traffic and other arrangements.

Addressing the community members CP Hyderabad City C.V. Anand (IPS) assured that city police has been making all arrangements and sought the cooperation of the community members and other departments. The city police have had internal meetings and discussed on elaborate bandoubust arrangements for Muharram. Along with Rapid action force, police platoon SHE teams will be deployed to keep the eve teasers at bay.

The city police chief said that most of the concerns raised by the community members in the previous meeting were resolved. He apprised them about the G.O. issued by the Telangana Govt to provide an elephant for the procession and urged them to take measures for the rest and safety of the animal.

He suggested to bring the elephant 2-3 days prior to the procession day so that it gets good rest and acclimatized. Police also suggested to maintain strict perimeter around it during the procession and opined that veterinary doctor, tranquilizers should be available.

Thousands of Shia Muslims will take part in the mourning procession, a 400 year old tradition mark the martyrdom of Imam Hussain(as) which starts from Alawa-e-Bibi(sa), Dabeerpura and passes through Charminar-Gulzar house, Purani Havel, Darulshifa before ending at chaderghat.

Traffic diversion plan, parking spaces will be notified soon and senior officers from traffic wing will be stationed to closely monitor the procession. to facilitate hassle free movement of the massive procession which will start from “Bibi Ka alawa” in Dabeerpura with the “alam” or insignia of the martyrs kept on a decorated elephant. Pending civil works, illumination was being done and officers will also take route survey to spot on hindrances. Senior officers will monitor the procession in field and procession route will be covered through CCTVs.

“As this is a mourning procession to express solidarity and a time to remember the great sacrifices of Imam Hussain, let us do it with our hearts rather than trying to dominate one another. “said CP HYD City C.V. Anand referring candidly to the infighting amongst the groups which is causing disquiet and issues for law and order. Ambulances, medical teams and emergency kits will be on stand-by.” He added.

The community members applauded the arrangements being done by the state government and the city police. The MLA s and MLC s and other Muslim Clergy spoke on the occasion . 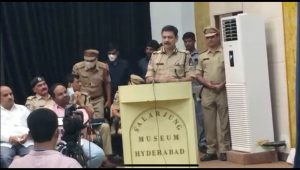 Addl. CP Law&Order D.S. Chuhan (IPS) also asserted on clearing the misunderstandings among the groups as Muharram is very auspicious month where one can not bring up differences among each other in this matter and have to perform the duties jointly. 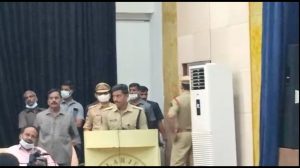 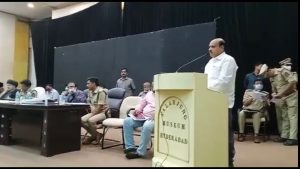 Syed Najaf Ali Shoukat started his speech informing about involvement of Hyderabad City Police in Mourning of Imma Hussain(as) and thanked them for their arrangements every year. He also welcomed and thanked the arrangements done by TRS government. After GHMC it is Police department who works very hard for the bandoubust during processions and at Markazi Majalis places, said Mr. Shoukat. Najaf Ali Shoukat informed and requested with CP Hyderabad to allocate SHE Team in Alawa-e-Bib(sa) from 1st Muharram to 10th Muharram for ladies Majalis and as well as to deploy the team there 24 hours till 10th Muhrram as daily ladies perform majlis in morning for 10 days. He also requested to deploy SHE Team apart at Alaw-e-Sartooq Mubarak, Panjesha-e-Vilayat, Bargah Hzt. Abbas(as) Deewn Dewdi, etc. Talking about the traffic and road arrangements it was brough to light by him and requested the authorities to remove the temporary road dividers from the roads as many mourners and matamdars take out processions form 6th Muharram onwards. He had asserted on Installation of more CCTV cameras and a joint control room to be opened at Sardar Mahal along with a temporary out post at Darulshifa for the surveillance & monitoring during Muharram period. Syed Najaf Ali Shoukat requested the Police department and authorities to allocate QQUSDA office for long term & four wheeler parking, and for two wheeler Yellow Gate Nizam Trust property at Purani Haveli to be open for parking. He had highlighted the hurdles faced due to heavy vehicles for which such vehicular traffic shall be enroute from Aza Khana-e-Zehra(sa) till Bibi bazar from 7th Muharram onward for the feasibility of mourners. Deployment of more traffic police for managing traffic at various place till late night was requested by him. Speaking about procession on 10th Muharram Najaf Ali Shouakt informed that there may be 25 or more Anjuman/Gurohaan participating in the procession. Police have been cooperating with the community and in-turn we will also fully cooperate with the department during the Alam-e-Bib(sa) procession as this is the peaceful procession, said Najaf Ali Shoukat. 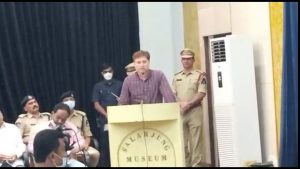 MLC Riyaz ul Hasan Effandi (Goldy) informed about the G.O. passed by the government of Telangana for the arrangements of Elephant which will be used to carry Alam-e-Bibi(sa) and had thanked Barrister Asadudding Owaisi MP Hyderabad for his representation and thanked the MLA Akbaruddin Owaisi for personally involving in getting the G.O. passed which was handed over to Mr. Aijaz by AIMIM Party President & MP Hyderabad Barrister Asaduddin Owaisi.