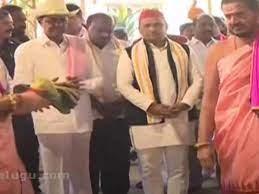 New Delhi’Dec 14′ 2022 : Chief Minister K Chandrashekhar Rao inaugurated the national office of Bharat Rashtra Samithi party at Sardar Patel Marg in Delhi on Wednesday. He unfurled the party flag at 12.37 pm as per the muhurat and assumed his chair in the party office, before signing the party documents at 12.43 pm. Ahead of the inaugural ceremony, the Chief Minister performed the Purnahuti marking the conclusion of the two-day Rajashyamala Yagam at the BRS party office. A total 12 ritwiks led by Gopikrishna Sharma and Phani Shashanka Sharma from Sringeri Peetham conducted the Yagam. They also performed the Nava Chandi Homam and the Rajashyamala Homam.

A festive atmosphere prevailed at the BRS national office as the party leaders including Ministers, MPs, MLAs, MLCs and other senior leaders arrived in Delhi in large numbers to participate in the inaugural ceremony. Soon after the Chief Minister hoisted the party flag, the BRS leaders raised slogans of ‘Jai Bharat’ and cheered in unison. 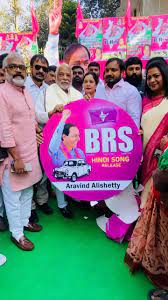 Meanwhile, BRS working president and Minister KT Rama Rao could not participate in the BRS national party office inauguration due to his preoccupied schedule. Accordingly, he took permission from the party President and Chief Minister Chandrashekhar Rao. Apart from participating in two key investment meetings in Hyderabad, he was also busy with nominations being filed by the TRS candidates for the Cooperative Electricity Supply Society (CESS) elections in Sircilla.

However, the Minister extended his greetings to the party workers and stated that the Chief Minister who was leading Telangana State on a progressive path, was foraying into national politics for a qualitative change in the country. He said the BRS would introduce people’s welfare and development policies to the rest of the nation.