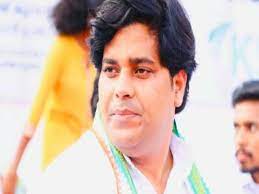 Hyderabad, Nov.2 (PMI): Congress MP & AICC Minorities Department Chairman Imran Pratapgarhi on Wednesday claimed that the success of the Bharat Jodo Yatra in Hyderabad was an indication that the people of Hyderabad have rejected the communal politics of BJP-TRS combine.

Imran Pratapgarhi, in a media statement, said AICC leader Rahul Gandhi has exposed the unholy nexus between the TRS and BJP and how both parties were trying to destroy the secular fabric of Telangana. Rahul Gandhi’s speech has unmasked the fake mask of secularism that Chief Minister K. Chandrashekhar Rao has been wearing since 2014. “It was CM KCR, who strengthened the BJP in Telangana with the sole intention of weakening the Congress party.

Consequently, Telangana got infected with the virus of communalism. KCR helped BJP win two by-elections and a few seats in the GHMC to make it appear strong. While doing so, TRS and BJP have tried to create a communal divide between the people based on religion. This divide has been filled with the entry of Bharat Jodo Yatra in Telangana, especially Hyderabad,” he added.

Imran Pratapgarhi said that thousands of people chanted the slogan of Bharat Jodo on the roads and lanes of Hyderabad during the Yatra. This was a direct message to the BJP and TRS that their communal politics would no more sustain in Telangana. Rahul Gandhi enlightened the people about real issues like the rise in prices of essential commodities, rising unemployment, housing for the poor and other matters concerning the common people. Now people would force all other parties to talk about their issues, instead of inciting religious hatred and enmity among various communities. He also said the speech of AICC President Mallikarjun Kharge was quite enlightening and exposed the evil designs of KCR in destroying the interest of Telangana for his political gains.

Meanwhile, TPCC Minorities Dept Chairman Shaik Abdullah Sohail said the Congress party would take the message of the Bharat Jodo Yatra to all households in Telangana. “Every step Rahul Gandhi walked during the yatra was aimed at uniting people. We will convey his message to every citizen of Telangana, especially the minorities. A follow-up campaign is being planned after the yatra enters Maharashtra on November 7,” he said.

Abdullah Sohail informed that Rahul Gandhi’s Bharat Jodo Yatra has received tremendous response in Telangana. He said the district units of the Congress party’s Minorities Dept have been directed to make elaborate arrangements for the success of Bharat Jodo Yatra in their respective districts.

AICC Minorities Dept Secretary Farhan Azmi thanked the Congress cadre of Telangana Congress for their enthusiastic participation in making the Bharat Jodo Yatra a grand success. He asked the cadre of other districts to work with the same spirit to strengthen Rahul Gandhi’s efforts to unite all and crush the divisive forces.(Press media of india)