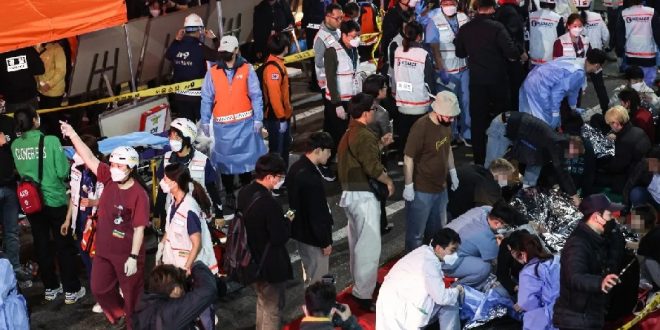 SEOUL: Over 120 people were killed in a stampede when a huge crowd celebrating Halloween crammed into an alley in a night life area of the South Korean capital Seoul on Saturday night, emergency officials said. 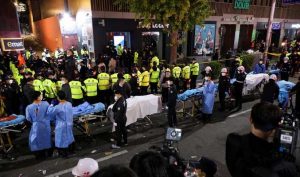 A further 100 people were injured in the crush in Seoul’s Itaewon district, Choi Sung-beom, head of the Yongsan Fire Station, said in a briefing at the scene.

Many of the injured were in serious condition and receiving emergency treatment, the officials said.

The incident took place at about 10:20 pm. A large number of people fell down in the alley during the festivities, Choi said. Many of the party-goers were wearing masks and Halloween costumes.

Witnesses described chaotic scenes moments before the stampede, with the police on hand in anticipation of the Halloween event at times having trouble maintaining control of the crowds.

Social media footage showed hundreds of people packed in the narrow, sloped alley crushed and immobile as emergency officials and police tried to pull them to free.

One woman heard on a social media post cries out in English: “Oh my God, oh my God, Jesus fucking Christ.” 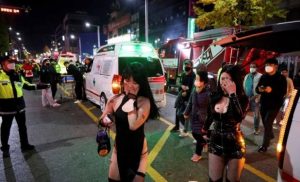 Other footage showed chaotic scenes of fire officials and citizens treating dozens of people who appeared to be unconscious.

A Reuters witness said a make-shift morgue was set up in a building adjacent to the scene. More than two dozen bodies were carried out later on stretchers, according to the witness.

“The area is still chaotic so we are still trying to figure out the exact number of people injured,” said Moon Hyun-joo, an official at the National Fire Agency.

Foreigners were among those transferred to nearby hospitals.

Authorities said they were investigating the exact cause of the incident. (Int’l Monitoring Desk)

Share
Previous Bandi hits back, says entire Telangana defiled by TRS
Next Thousands of workers forced out in Qatar’s capital