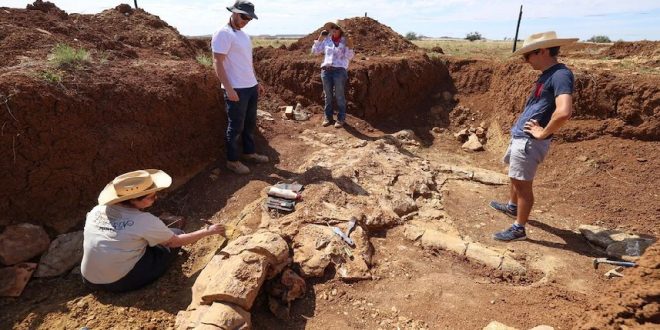 MELBOURNE/ QUEENSLAND: The complete head and body of an ancient marine reptile with “flippers like a turtle and long neck like a giraffe” has been uncovered in Queensland in what scientists say is a rare discovery. 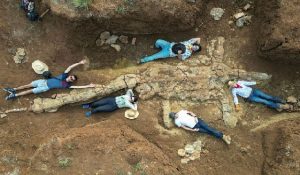 Paleontologists unearthed the complete fossil of the plesiosaur near the remote western Queensland town of McKinlay after a property owner sent images to researchers.

It is the first time in Australia the head and body of an elasmosaur, a type of plesiosaur, has been found in one piece.

Museum of Tropical Queensland senior curator of paleontology Espen Knutsen said he had been trying to find “such a fossil” for many years.

Dr Knutsen said the discovery, believed to be around 100 million years old, would enhance understanding about the evolution and diversity of the species.

“You can spend years in the field and not necessarily find the thing you need to unlock the answers to those questions you have … but it seems like we’ll be able to draw some lines under some of those unknowns,” Dr Knutsen said.

‘Bizarre animals’ swimming in the outback 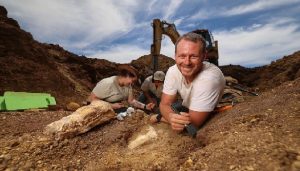 Queensland Museum paleontological research assistant Christina Chiotakis was on the four-person team that excavated the site over five days in October.

“It was absolutely phenomenal … until you see them you don’t realize just how big plesiosaurs can be,” Ms Chiotakis said.

Measuring around six metres in length, experts believe the newly-discovered specimen is younger than the plesiosaur fossils held in the museum’s collection.

She said they had flippers like a turtle and long necks like a giraffe … with tiny tails and large bodies.

“It is odd to think we are finding marine reptiles, turtles and fish in what is now essentially desert in outback Queensland but back in the Cretaceous period [145- 66 million years ago] it was an inland sea,” she said.

The team has packaged the individual bones in bubble wrap, plaster and wet toilet paper to retain moisture and taken them to the Museum of Tropical Queensland in Townsville for further analysis. 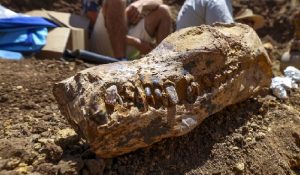 “Putting all these pieces together tells a really fantastic story of how the Earth has evolved.

“That gives us a lot of ability to understand the biodynamics of these types of animals, how they move, what sort of environments they need to be in and how a skeleton is put together.”

Meanwhile, Dr Knutsen said he would return to the site.

He said he hoped another rare discovery was lurking just metres below the surface.

“Even though people have been collecting fossils out there for nearly 100 years, there’s still the potential that new things can crop up from these ancient eco-systems.