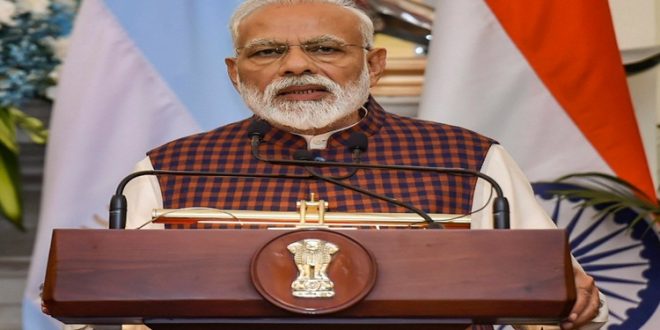 Time has come to deal with terrorism firmly, says PM

Prime Minister Narendra Modi on Monday said that the Pulwama terror attack shows that the time for talks is over and now the world has to join hands to deal with terrorism and those who are supporting it.

In his press statement after holding delegation-level talks with Argentinian President Mauricio Macri in New Delhi, Mr. Modi said, he and Mr Macri agreed that terrorism is a huge threat to global peace and stability. The Prime Minister said, there should be no delay in taking action against terrorism as it encourages terrorism further.

Calling Argentina a powerhouse of Agriculture, Mr Modi said, India sees it as a partner for food security. Saying that India-Argentina trade has increased to three billion Dollar in the last ten years, Mr Modi said, the two sides can increase their cooperation further to improve economic relations.

In his press statement, Argentinian President Mauricio Macri firmly condemned the Pulwama terror attack. He said there is a need to fight terrorism. He said Argentina and India have shared values on multilateralism and diversity. He said Argentina sees India as its business partner and both sides have great opportunities in non-conventional energies.

India and Argentina also signed ten MoUs in several areas, including Defence, Civil nuclear, Tourism, pharmaceuticals and agriculture. An MOU on Cooperation and Collaboration between Prasar Bharti and the Federal System of Media and Public Contents of Argentina were also inked.

President Ram Nath Kovind will host a Banquet in honour of the Argentinian President in the evening. He is scheduled to visit Mumbai tomorrow.