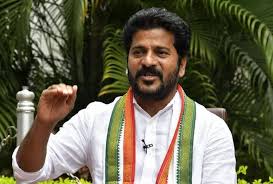 : Congress MP A. Revanth Reddy here on Friday said the BJP-led NDA government showed discrimination towards southern States, including Telangana State. He said the Centre failed to extend any help to the irrigation projects of Telangana State in the Union budget.
Addressing mediapersons after presentation of the Budget by Union Finance Minister Nirmala Sitharaman, Revanth Reddy said there was no specific scheme for encouraging Education and Employment sectors in the State. Alleging that the Union government was showing step-motherly treatment towards southern States, he said the Centre was paying back Rs 2 to Uttar Pradesh in return of Re 1 income generated from the State, Re 1 to Bihar in return of Re 1 income from that Stae, Revanth said the Centre was giving only 65 paisa to the southern States in return of Re 1 income from them.
He also said there was no relief to the poor and middle class people in the Union budget. He also alleged that although the Union Finance Minister hails from south India, she became a puppet in the hands of Prime Minister Narendra Modi.