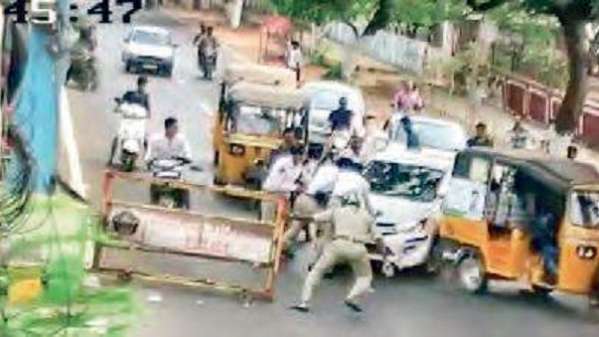 Attempting To Escape BTech Student Mows Down Cop In Kakinada 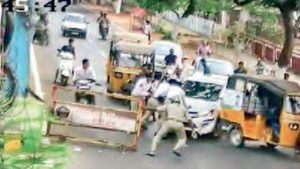 Kakinada: In yet another shocker, a traffic policeman was mowed down in broad daylight by a youth who was behind the wheel in an inebriated state. A video of the incident which occurred a few days ago has gone viral.
The incident happened in Kakinada of East Godavari district. The accused has been identified as Sidda Srinivas, a 21-year-old BTech student.
Along with Srinivas, four others were seated inside the car. The traffic cops were conducting a check on helmet driving at the time of the incident. As they tried to stop the car, it picked up speed and in trying to evade Srinivas. The video shows the car knocking the constable down, leaving him severely injured.
The constable is undergoing treatment at Kakinada government hospital. The accused has been arrested and sent to remand. A case under sections 332 and 307 of the IPC and under the Motor Vehicles Act has been booked.
2018-03-31
admin
Previous Gujarat Dalit Killed For ‘Riding Horse’, 3 Held
Next Focus on Fisheries development: Talasani tells Collectors