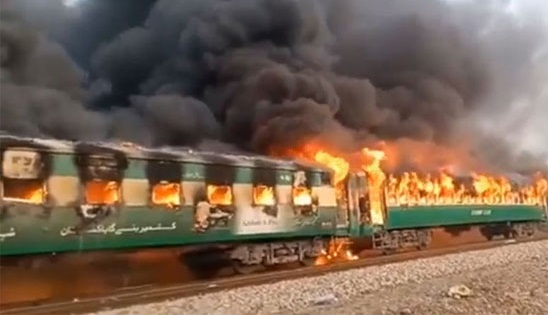 MELBOURNE/ LAHORE/ RAHIM YAR KHAN: At least 65 people were killed and scores injured when a train caught fire near the city area of Liaquatpur on Thursday. 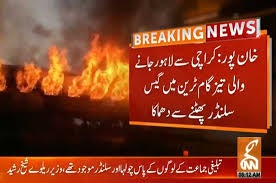 The train, Tezgam, was on its way from Karachi to Rawalpindi, when a gas cylinder carried by a passenger exploded, leaving several dead and injured.

The fire destroyed three of the train’s carriages, including two economy class carriages and one business class.

Head of the district rescue service Baqir Hussain confirmed the news of the death toll. Hussain added the dead bodies will be identified through DNA.

Hospital sources said, 10 of the dead bodies have been identified, while 17 are unidentifiable.

A Pakistan Railways official confirmed that the fire was caused by the explosion in a gas cylinder. After the blast, the raging fire engulfed two other coaches as well. 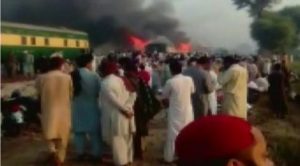 Railways Minister Sheikh Rasheed while speaking to media said, “Two cooking stoves blew up. They were cooking; they had (cooking) oil which added fuel to fire.”

“Most deaths occurred from people jumping off the train,” he added.

He added, the train track will be functional in two hours.

He added, men from a Tableeghi Jammat were travelling in the carriage where the incident occurred. “Bogies were severely damaged by the fire and they have been detached by the rest of the train,” he said.

Rasheed added the fire had been extinguished and cooling efforts were underway.

Earlier, Hussain, told media some of the dead were killed when they jumped from the moving train to escape the flames. 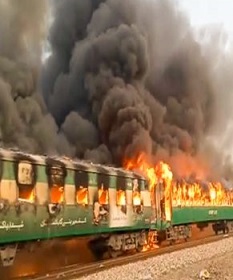 CEO Pakistan Railways Aijaz Ahmad said the train schedule will not be affected by this incident.

In their separate condolence messages, they condoled with the bereaved families.

The prime minister directed the authorities concerned to provide prompt and best possible medical treatment to those injured in the incident.

Pakistan Army soldiers reached the scene of the incident and were helping with the rescue operation, a statement from the Inter-Services Public Relations (ISPR) said.

“Pakistan Army soldiers are working with the civil administration to help with the operation. An army aviation helicopter has reached the scene of the incident,” the statement added. 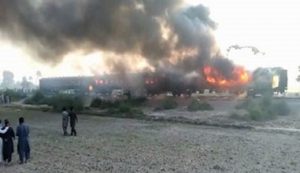 The military’s media wing added, the helicopter was transporting the injured to the hospital.

At least 24 people were killed in July, when the Akbar Bugti Express travelling from Lahore to Quetta collided with a stationary freight train at the Walhar Railway Station in Sadiqabad Tehsil of Punjab province.