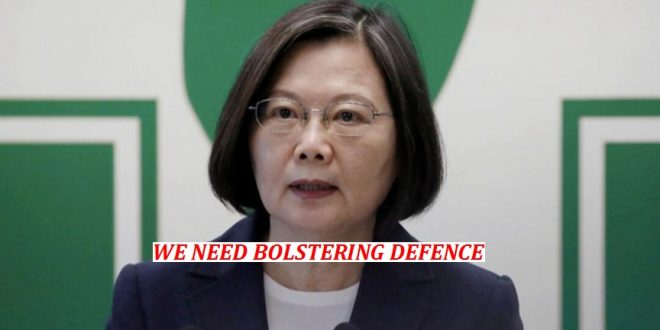 War with China ‘absolutely’ not an option: Taiwan

TAIPEI: War between Taiwan and China is “absolutely not an option”, Taiwan President Tsai Ing-wen said on Monday, as she reiterated her willingness to talk to Beijing and also pledged to boost the island’s defences including with precision missiles. 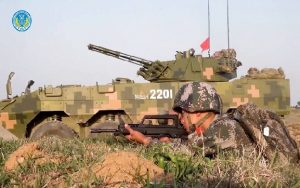 China again rejected her latest overture, saying the island was an inseparable part of its territory.

Democratic Taiwan, which China claims as its own, has come under increasing military and political pressure from Beijing, especially after Chinese war games in early August following a Taipei visit by US House Speaker Nancy Pelosi.

Any conflict over Taiwan could drag in the United States, Japan and perhaps much of the world, as well as shatter the global economy, especially given Taiwan’s dominant position as a maker of semiconductors used in everything from smartphones and tablets to fighter jets.

Tsai, in her national day speech outside the presidential office under a grey sky, said it was “regrettable” that China had escalated its intimidation and threatened peace and stability in the Taiwan Strait and region.

China should not think there is room for compromise in the commitment of Taiwan’s people to democracy and freedom, she said. 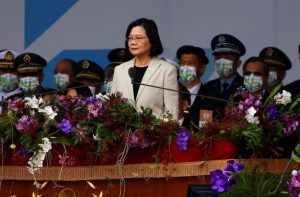 sides. Only by respecting the commitment of the Taiwanese people to our sovereignty, democracy, and freedom can there be a foundation for resuming constructive interaction across the Taiwan Strait.”

Speaking in Beijing, Chinese Foreign Ministry spokesperson Mao Ning said Taiwan is part of China, “has no president and is not an independent country”.

“The root cause of the current tensions in the Taiwan Strait lies in the Democratic Progressive Party authorities’ stubborn insistence on Taiwan independence and secession,” she said, referring to Taiwan’s ruling party. “We are willing to create a broad space for peaceful reunification, but we will never leave any space for Taiwan independence and secession activities.”

China calls Tsai, re-elected by a landslide in 2020 on a promise to stand up to Beijing, a separatist and refuses to speak to her. 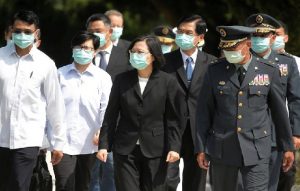 An official familiar with Tsai’s thinking, speaking on condition of anonymity, told reporters the president was looking to “clearly convey” her position to the world and Beijing.

“Standing firm on the status quo of peace and stability in the Taiwan Strait is the main axis of Tsai’s comments on cross-strait relations this year,” the official said, adding this was the world’s expectation and responsibility of both Taipei and Beijing.

‘No room for compromise’

Tsai said, to applause, that her government looked forward to the gradual post-pandemic resumption of healthy and orderly people-to-people exchanges across the strait, which would ease tensions but the broad consensus in Taiwan is that its sovereignty and free and democratic way of life must be defended, she added.

“On this point, we have no room for compromise,” she said.

Tsai has made strengthening Taiwan’s defences a cornerstone of her administration to enable it to mount a more credible deterrence to China, which is ramping up an ambitious modernization program of its own military.

Taiwan will show the world it is taking responsibility for its own defence, Tsai said. 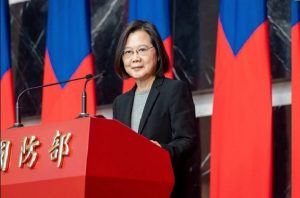 Taiwan is increasing mass production of precision missiles and high-performance naval vessels, and working to acquire small, highly mobile weapons that will ensure Taiwan is fully prepared to respond to “external military threats”, she added.

The military tensions have raised concerns, especially in the United States, about the concentration of chip making in Taiwan.

“I want to specifically emphasize one point to my fellow citizens and the international community, which is that the concentration of the semiconductor sector in Taiwan is not a risk,” she said.

“We will continue to maintain Taiwan’s advantages and capacity in leading-edge semiconductor manufacturing processes, and will help optimize the worldwide restructuring of the semiconductor supply chain, giving our semiconductor firms an even more prominent global role,” she added. (Int’l Monitoring Desk)