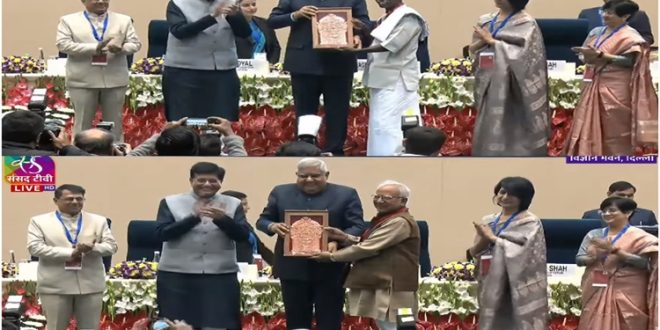 New Delhi’Nov’28’2022-Vice President Jagdeep Dhankhar today gave away Shilp Guru and National Awards to master craftspersons for 2017, 2018, and 2019 at a function in New Delhi. These awards are conferred every year to legendary master craftspersons of handicrafts whose work has contributed to the preservation of the rich and diverse craft heritage of the country. The main objective of the award is to give recognition to outstanding craftspersons in the handicrafts sector. The awardees represent almost all states and Union Territories of the country, as well as different craft styles of different locations.

Speaking on the occasion, the Vice President congratulated the artists saying that they are the cultural ambassadors of the country whose artifacts show the cultural depth of India. He said, due to its creativity Indian handicrafts are more sought after in the world.  On India’s growing stature in the world, Mr. Dhankar said, India is going to take G20 Presidency at a time when the world is listening to the words of Prime Minister Narendra Modi. He asserted that the rise of the country is unstoppable and India is the most favored destination in terms of investment and opportunities in the world.  The  Vice President lauded the government for the massive vaccination drive for COVID-19. He also highlighted the government’s initiative related to free ration to around 80 crore people during the pandemic.

On the occasion, Union Textile Minister, Piyush Goyal said, India is one of the major handicraft hubs of the world and its handicrafts export is increasing continuously.  He also said, handicrafts provide a livelihood to lakhs of people in rural areas and also become a medium to empower the underprivileged.