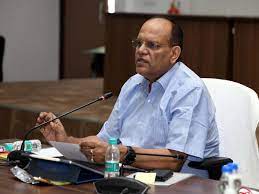 Hyderabad, Dec.29 (PMI): As per the directions of Chief Minister  K Chandrashekar Rao, Chief Secretary Somesh Kumar called on Union Defence Secretary A Giridhar in New Delhi on Thursday and discussed about the long pending issues relating to defence lands.

The Chief Secretary requested for transfer of defence land to the State government for construction of alternative roads in AOC centre in lieu of closure of AOC roads.

He sought permission for construction of sky walk at Mehdipatnam and also brought the matter to his notice about the requirement of  Defence lands for construction of elevated corridors, formation of  link roads and widening of roads in various parts in Telangana.

During the meeting, he has also reminded that paddy is the most important crop in Telangana and the union government should take steps to improve post harvest management.

The Chief Secretary said the State government has already taken up providing threshing platform for small and marginal farmers. (PMI)