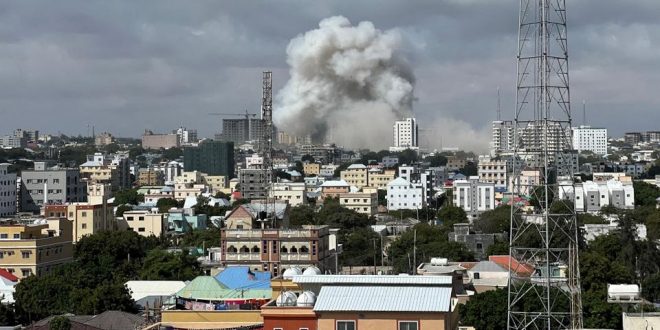 ‘Scores of casualties’ after twin blasts in Somalia’s capital

A vehicle loaded with explosives was driven into the ministry compound and was followed by gunfire, police officer Ibrahim Mohamed said. 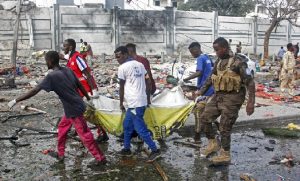 “In a few minutes another blast occurred in the same area,” he said.

“Many bodies” were at the scene and they appeared to be civilians travelling on public transport, while the second bombing occurred in front of a busy restaurant, The Associated Press reported.

A police officer guarding the ministry, who gave his name as Hassan, said he saw at least 12 bodies and more than 20 people wounded. Blood from victims of the blasts covered the tarmac just outside the building.

Abdikadir Abdirahman, founder of the Aamin Ambulance Service, told media a driver and a first aid worker were injured in the second blast as their ambulance came to transport casualties from the first bombing.

“I saw huge smoke in the ministry area and there is massive destruction,” witness Amino Salad said.

There was no immediate claim of responsibility for the attack, but the armed group al-Shabab routinely carries out such bombings in Somalia. 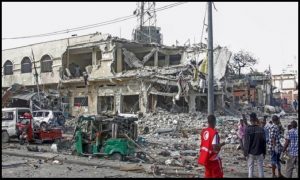 Saturday’s explosions occurred at Zobe junction, the scene of a massive al-Shabab blast in 2017 that killed more than 500 people.

Fighters from the group were ousted from Mogadishu in 2011, but they continue to stage attacks on military, government and civilian targets.

The group last week claimed responsibility for a siege of a hotel in the port city of Kismayo that killed nine people and wounded 47 others.

Thousands of Somalis have been killed in the decade-long rebellion.

In August, al-Shabab launched a 30-hour gun and bomb attack on the popular Hayat hotel in Mogadishu, killing 21 people and wounding 117.

Somali President Hassan Sheikh Mohamud, who was elected in May, pledged after the August siege to wage “all-out war” on the group. The fighters responded by killing prominent clan leaders in an apparent effort to dissuade support for that government offensive.

Saturday’s attack in Mogadishu occurred on a day when the president, prime minister, and other senior officials were meeting to discuss combating the armed group. (Int’l Monitoring Desk)