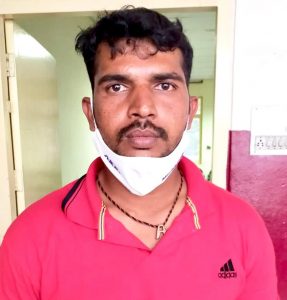 Hyderabad;Facts of the case are that, on 24.12.2020 at 0715 hours, Balapur Police received a complaint from Sri. Shaik Abdullah Bawazeer S/o Shaik Hussain Bawazeer aged 25 years, occ: Internet Business, R/O Bandlaguda Mandal, Chandrayangutta, in which he stated that since three years he has been doing internet and cable connection business at Quba colony, Shaheennagar, Balapur Mandal and he set the routers (Internet) to the electric poles at Quba colony, since few days some unknown persons disconnected the internet cables. Inspite of efforts he could not identify them. On the intervening night of 23/24.12.2020 at about 0010 hours he went to Quba colony while proceeding towards his office on his motor cycle by checking the internet cable poles, at that time he found the accused Mubarak Sigar and asked him about his presence at that place, on that the accused Mubarak requested him to give money, when he refused to do so, meantime the accused Mubarak Sigar got angry and took a knife and stabbed with an intention to kill him, immediately he made a phone call to his brother and informed the same, after some time his brother Shaik Ahmed Bawazeer and his friends rushed there and while they were rescuing the injured from his hands, the accused Mubarak also assaulted on them with knife and escaped from there on his motor cycle, as a result he and three others were sustained bleeding injures.

The accused Mubarak Bin Abdullah @ Mubarak Sigar is Rowdy Sheeter of Balapur PS and he was detained under PD Act by CP, Rachakonda in the year 2018.