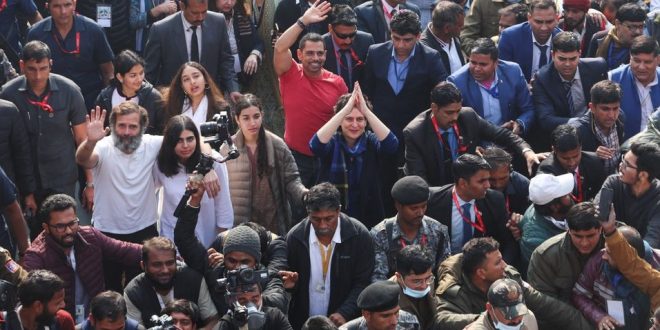 NEW DELHI: A cross-country march led by Indian opposition leader Rahul Gandhi has reached the capital New Delhi after passing through eight states, hoping to regain some of the popularity it lost to the ruling Hindu nationalist party. 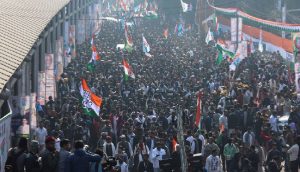 Tens of thousands of people have joined Gandhi’s “Unite India March” against “hate and division”, which aims to turn the Congress party’s fortunes around after its drubbing by the Bharatiya Janata Party (BJP) in two successive national elections.

“Hindu-Muslim hatred is being spread twenty-four-seven to divert your attention from real issues,” Gandhi said in his speech at the Mughal-era Red Fort in the Indian capital.

“They will spread hate. We will spread love,” he said, referring to Prime Minister Narendra Modi’s BJP.

Hindu nationalism has surged under Modi and his party, which have been criticized over rising hate speech and violence against Muslims in recent years. Opponents say Modi’s silence emboldens right-wing groups and threatens national unity, but his party has denied this.

“There are concerns about the plight of minorities, the shrinking space for dissent, as well as the government’s handling of the pandemic and the economy,” said Al Jazeera’s Pavni Mittal, reporting from New Delhi.

“Analysts say the Congress’s inability to be an effective opposition and hold the government accountable has contributed to the BJP’s unprecedented success,” she added. 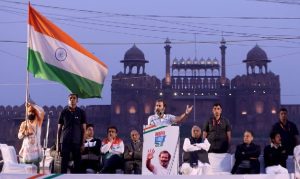 The Nehru-Gandhi family has controlled the Congress party for decades but has also overseen its recent decline. The party currently governs just three of India’s 28 states.

Rahul Gandhi resigned as Congress president after the last general election. The next national polls are due by 2024.

Plagued by a leadership crisis and series of electoral routs, the Congress in October elected Mallikarjun Kharge, its first non-Gandhi president in 24 years, in an attempt to shed the image of being run by a single family.

Kharge on Saturday wrote on Twitter the march is “against the politics of inflation, unemployment, inequality, and hatred”.

“(This) national mass movement has gathered the hopes of crores [millions] of people by reaching the throne of power,” he posted.

The march will take a nine-day break in New Delhi before starting its final leg on January 3 towards Srinagar, the main city in Indian-administered Kashmir in the north. 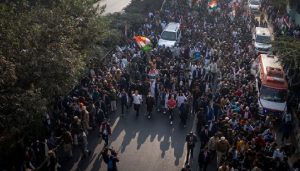 The 3,570-km (2,218-mile) Unite India march began in September in the coastal town of Kanyakumari on the southern tip of India.

Congress leader Jairam Ramesh told journalists on Saturday the march – which is broadcast live on a website has completed nearly 3,200km (1,988 miles) so far in nine states.

Sharing a picture of himself hugging his mother during the rally, Gandhi tweeted: “The love I have received from her is what I am sharing with the country.”

Passing through hundreds of villages and towns, the march has attracted farmers worried about rising debt, students complaining about increasing unemployment, civil society members and rights activists who say India’s democratic health is in decline. 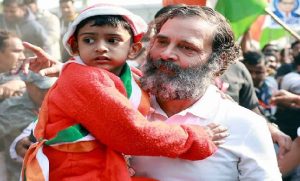 In multiple impassioned speeches during the march, Gandhi often targeted Modi and his government for doing very little to address the growing economic inequality in India, the rising religious polarization, and the threat posed by China.

The armies of India and China are locked in a bitter standoff in the mountainous Ladakh region since 2020. Despite over a dozen rounds of talks at military, political and diplomatic levels, the standoff has protracted.

Meanwhile, Modi’s party has dismissed Gandhi’s march and speeches as a political gimmick to regain his “lost credibility”.

“The character of the Congress has been to break India,” the party said in a tweet on Saturday.

Javed M Ansari, a journalist and political commentator, said the march has succeeded in reinvigorating the Congress Party.

“There is a certain momentum now, an essential purpose as far as the Congress workers are concerned,” Ansari told media.

The popularity of the march has “certainly changed Gandhi’s image” for the better, he said, adding that the challenge for his party now will be to translate the enthusiasm in the streets into votes.