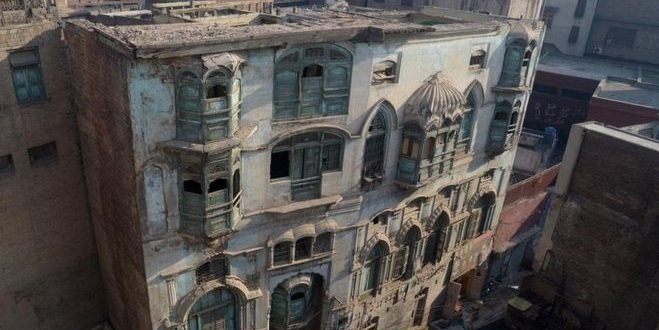 Pakistan to save ruined homes of Raj Kapoor, Dilip Kumar 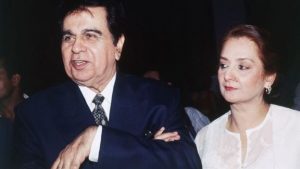 PESHAWAR/ ISLAMABAD: The ancestral homes of two Bollywood legends are to be saved from crumbling into ruin in northern Pakistan.

The houses belonged to the families of Raj Kapoor and Dilip Kumar who migrated to India in the years before Pakistan was created from British India in 1947.

Officials in Peshawar say the dilapidated homes are to be bought, restored and turned into museums.

The city has a vibrant cultural history, and a host of Bollywood’s greatest stars trace their roots there.

Raj Kapoor and Dilip Kumar were born and raised in Peshawar’s oldest and most famous road, Qissa Khwani – or Street of Storytellers – later moving to Mumbai where they became leading actors of their generation.

A host of current and former top Bollywood stars, including Shah Rukh Khan, have roots in the same area of Peshawar’s old city. 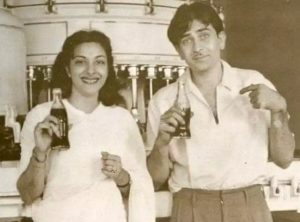 Kapoor and Kumar started acting in the 1940s and went on to become two of the biggest stars of the film industry that would eventually become Bollywood. They even starred together in one of their early successes – Andaz, a 1949 film.

Kumar’s gentlemanly roles and Kapoor’s antics captivated generations of cinema-goers. While Kumar was known as the “tragedy king”, often essaying sober and melancholic roles, Kapoor, nicknamed “the showman”, was a performer – joyful, cheeky, charming or pensive, whatever the role demanded.

Kapoor died in 1988. Kumar, who is 97, lives in Mumbai with his wife, Bollywood actress Saira Banu.

Since the 1970s, Peshawar’s cultural heritage has suffered. In recent years, the city became known for militancy and conservatism and the rise of the Taliban saw many local buildings destroyed.

Under the conservation plan, around 1,800 buildings in Peshawar over 100 years old will be acquired and restored by the provincial government. 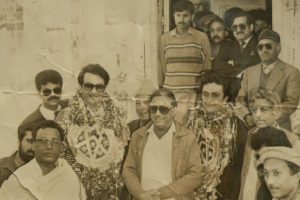 “The move is part of efforts to restore Peshawar’s traditional culture which fell by the wayside due to the war on terror,” Director of Archaeology and Museums Dr Abdus Sama told media.

Work on a couple of buildings has already begun, he said.

The Kapoor and Kumar homes are both now in the hands of private owners. Not far away is the former family home of current-day Bollywood superstar, Shah Rukh Khan. Officials say the fact that three such major stars and so many others hailed from this tiny corner of Peshawar means the area deserves a Bollywood museum of sorts.

And that’s exactly what they are planning – they want to turn the mansions, both more than a 100 years old, into museums which will house memorabilia on the respective actors, including Shah Rukh Khan. 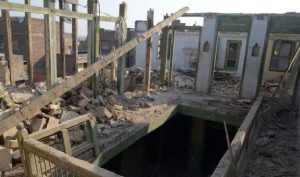 There will also be a film library, and other elements reflecting Peshawar’s Bollywood connection.

The two homes are badly in need of substantial renovation. The ornate Kapoor haveli (mansion) is literally falling apart. Its arched windows and protruding balconies still hint at lost grandeur. The facade of the rather less grand home where Dilip Kumar was born nearby is cramped into a tiny alley and the house itself looks shabby, with once expensive woodwork soiled, cracked and covered in cobwebs.

The Kapoor haveli was built between 1918 and 1922 by Raj Kapoor’s grandfather, Deewan Basheswarnath. He was a police officer in British India, originally from what is today Faisalabad in Pakistan but he was posted in Peshawar for a long time. His son, Prithviraj Kapoor, who was one of Hindi cinema’s first big stars, starting his career in the silent era, was born in this house. He caught his acting break in Peshawar, where he starred in local plays, before moving to Bombay (now Mumbai) in the late 1920s to make it to the big screen. 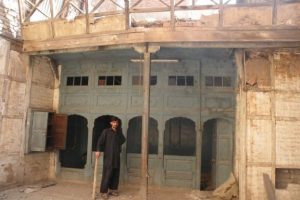 His son, Raj Kapoor, was born on 14 Dec 1924 in the same house. He would go on to become one of India’s most prolific and loved stars, directing and producing in his later years.

The family returned to Peshawar often until they sold the house some years before Pakistan was partitioned from India in 1947, says Shakeel Waheedullah, head of the Cultural Heritage Council of Peshawar. The group has been fighting for years to protect the buildings.

He says the house has changed hands on a number of occasions, and even came close to being demolished by the current owner, a jeweller who wanted to build a shopping mall in its place. It was saved when the heritage group intervened.

The building still lost its top two storeys, and the owner faced arrest when the provincial archaeology department stepped in to halt the demolition.

In 1990, Kapoor’s sons – Rishi and Randhir – visited the house. When Rishi died earlier this year, people in Peshawar 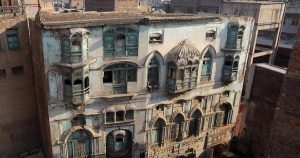 mourned and they lit candles for his uncle, Shashi, another star, when he died in 2017.

Dilip Kumar’s house was built by his father who was a fruit merchant. Kumar was born in Peshawar as Mohammed Yusuf Khan on 11 December 1922. According to Mr Waheedullah, Kumar’s father suffered substantial business losses in the mid-1920s, forcing the family to move to Bombay in search of better opportunities.

Having re-established the family fortunes in India, Kumar’s father sold his house in Peshawar in 1930 for a sum of 5,000 rupees. The house has since been sold several times and is currently being used as a warehouse.

Kumar visited it in 1988. He wanted to return again in 1997, when he was in Pakistan to receive an award from the government, but he could not because of the large crowds that had already gathered in anticipation of his arrival.