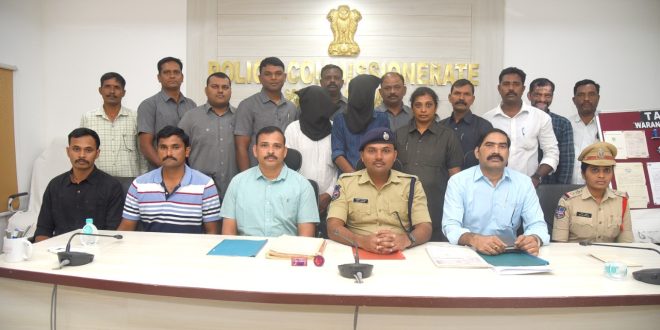 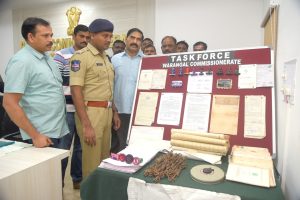 warangal’Nov 26’2022 (press media of india)Maddi Venkata Reddy (70) and Kalvacharla Raghu (50) of Nekkonda mandal of Warangal district, who were creating fake revenue documents to earn easy money with the experience of working in the revenue department, who retired as VAO, were jointly arrested by the task force and Nekkonda police. Arrested. Police seized from them fake Pattadaru passbooks, Sakili land conversion proceedings of RTO, 130 and C forms, fake prints, pahanis, quotations, bank challans, gram nakshas and stamp papers of Tahsildar and RTO officials from the house of the retired VAO.

In connection with these arrests, Additional DCP Vaibhav Gaikwad revealed the details of Maddi Venkata Reddy, one of the two accused arrested by the police, who worked as a Patwari, Panchayat Secretary, VAO in Nekkonda and Parvatgiri mandals in the revenue department from 1973 to 2012. But even after retirement, the accused has not lost his obsession with money and has been able to earn money easily. With his long experience of working in the revenue department, he exposed the creation of fake graduate passports, fake land conversion 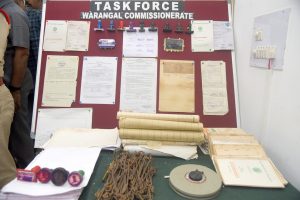 proceedings related to RTO, 13G and C forms. Another accused, Kalvacharla Raghuto, used to forge the signatures of Tehsildar and RTO on the forged passbooks and documents thus prepared. The accused used to make money by giving the fake revenue documents created in this way to the needy people. In this way people who get fake revenue pass books and documents get loans from banks. After getting information about this matter to the authorities, the police did not take the accused into custody, but he admitted the crime committed by the accused. Additional DCP said that cases have been registered against these two accused in Nekkonda and Parvatgiri police stations.