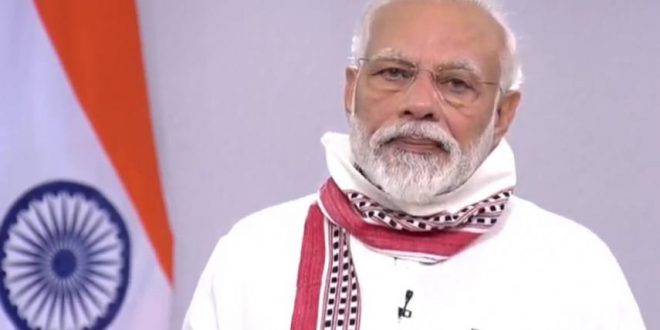 My heart goes out to Morbi bridge collapse victims, says PM Modi as he turns emotional

Gujarat’Oct 31’2022:Prime Minister Narendra Modi on Monday said that enemies were trying to break India’s unity and the country should stand firm against such attempts.

After paying tributes to India’s first home minister Sardar Vallabhbhai Patel on his birth anniversary at the Statue of Unity at Kevadia in Gujarat, Modi remembered those who died in Sunday’s Morbi bridge collapse incident.

“I am in Kevadia, but my heart goes out to those who died in the Morbi Bridge collapse tragedy,” the PM said as he got emotional.

Troupes from across country had come to Kevadia to perform traditional dances, but the programme was cancelled due to the present circumstances, he said.At least 134 people were killed after the suspension bridge on the Machchhu river in Gujarat’s Morbi city collapsed on Sunday evening.

The prime minister assured the government was standing shoulder to shoulder with the families of the victims.

The state government has been engaged in the rescue work and the central government is providing every possible assistance, he said.

Modi said for India, its unity has never been a compulsion, but has been its uniqueness.

“This unity of our country has been an eyesore for our enemies. Not just today, but from thousands of years and even during the period of our slavery, all foreign attackers did whatever they wanted to do to break this unity,” he said.

“The poison which was spread in that long period, the country is facing problems due to it today also. We saw the country’s partition and enemies taking advantage of it,” Modi said.

Those forces are still prevalent, they want to make the people of the country fight in the name of caste, region and language, he said, adding that history is also presented in such a way that people cannot stand with each other.

“We should note that these forces are not just our known enemies from outside, but many a times those forces enter into our system in the form of slave mentality, those forces present themselves sometimes to us as a selfish motive, appeasement, nepotism, greed and corruption,” he said.

“We have to answer them as the son of this country, we have to remain one,” Modi said.

It is difficult to imagine the situation if India’s integration was not led by leaders like Sardar Patel. What would have happened if more than 550 princely states were not amalgamated? the PM said.

“If our princely states would have not shown a deep sense of sacrifice and faith in Maa Bharati and decided not to join us, what would have happened? This impossible task was completed by Sardar Patel,” he added.

Modi said Sardar Patel’s Jayanti and the Ekta Diwas are not merely dates on the calendar for us, they are a grand celebrations of India’s cultural strength.On the occasion, the Rashtriya Ekta Diwas parade was held comprising contingents of different police forces.

Modi said, “I would like to reiterate the responsibility handed over by Sardar Saheb. The responsibility of the citizens is to strengthen the nation’s unity and this will happen only if every citizen of the country is ready to carry out the duties with a sense of responsibility.”

With this sense of responsibility, “sabka saath, sabka vikas, sabka vishwas and sabka prayas” will become a reality and India will move forward on the path of development, he said.

The prime minister expressed deep anguish over the Morbi bridge tragedy.He said even though he is in Kevadia, his heart remains connected to victims of the accident in Morbi.

“On one hand, there is a heart laden with grief, while on the other there is the path of Karma and Kartavya,” Modi said.

He said it is the path of duty and responsibility that has led him here on the Rashtriya Ekta Diwas.

He said the National Disaster Response Force (NDRF) personnel have been deployed for the rescue operations apart from teams of Army and the Air Force, while assistance is also being provided to hospitals which are treating the injured.

Modi noted that Gujarat Chief Minister Bhupendra Patel reached Morbi to take the lead in supervising the rescue operations and formed a committee to investigate the incident.