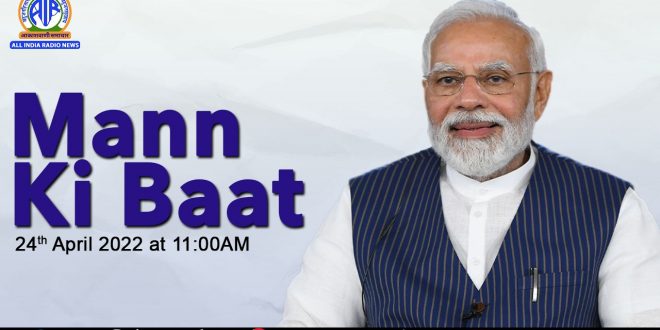 New Delhi’24 April;Prime Minister Narendra Modi today said, small online payments are helping build a big digital economy in the country. Addressing the nation in his Mann Ki Baat programme on All India Radio, Mr Modi stated that digital transactions worth 20 thousand crore rupees are being conducted in the country every day.

The Prime Minister expressed satisfaction that the culture of digital payments is growing in India. He said, Unified Payments Interface (UPI) has rapidly become part of the country’s economy as people are transacting through it even in remote villages and small towns.

Touching the topic of water conservation, the Prime Minister said, the country is moving forward with the resolve to conserve water in the Azadi Ka Amrit Mahotsav. During the Amrit Mahotsav, 75 Amrit Sarovars will be built in every district of the country. The Prime Minister said, the availability or scarcity of water determines the progress and speed of any country. He added that saving water and building ponds have been termed as a social and spiritual duty in the Vedas and Puranas.

The Prime Minister also quizzed listeners on their general knowledge regarding the country’s museums. He asked listeners to share the answers on NaMo App or social media with #MuseumQuiz. Mr Modi appreciated all such individual efforts. International Museum Day will be celebrated all over the world on 18th May.

Mr Modi also discussed mathematics in this edition of Mann Ki Baat. The Prime Minister assuaged students who find Maths a tough subject, saying Mathematics has never been a difficult subject for Indians. He said a big reason for this is Vedic Mathematics. He said the people of India have given the most research and contribution in the field of mathematics. He gave the example of the discovery of zero and its importance.

The Prime Minister concluded his address by urging people to follow all the COVID protocols like wearing masks and washing hands.