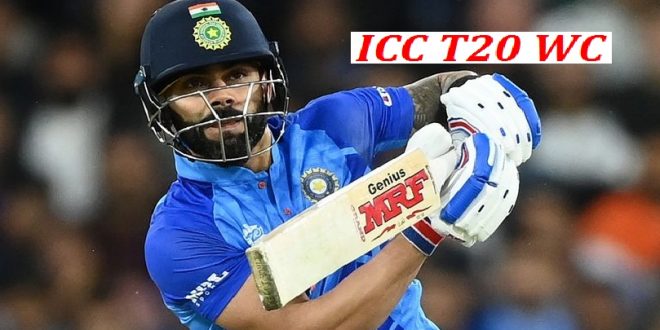 Kohli pull off a thrilling win over Pakistan

MELBOURNE: An unbeaten 82 from Virat Kohli led India to a last-ball win over Pakistan to supercharge their bid for a first Twenty20 World Cup crown since 2007 in front of 90,000 fans at the Melbourne Cricket Ground. 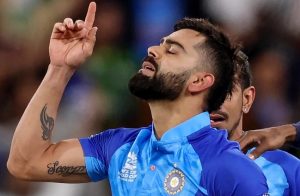 The top-ranked Indians restricted Pakistan to 159-8 and scraped home by four wickets after a sensational final over with superstar Kohli the hero.

It looked to be going badly for India as they struggled to just 45-4 off 10 overs, halfway through their chase but Kohli and Hardik Pandya (40) launched a fightback with a century stand that left India needing 16 off the final over from a nervous Mohammad Nawaz, who peppered it with wides and no-balls to help them to their target.

Victory was critical in a group that also includes Bangladesh, South Africa and qualifiers the Netherlands and Zimbabwe, with only the top two making the semi-finals.

“It’s good for our confidence to get off the mark in our first game, and the way we won is more pleasing for us, the way we came back. Hats off to Virat. It has to go off as not one of his best, but the best innings he has played for India,” said India captain Rohit Sharma.

India have largely dominated Pakistan since the late 1990s but lost two of their three previous clashes including by 10 wickets in the group phase at last year’s T20 World Cup as well as losing the Asia Cup Super-4 match. 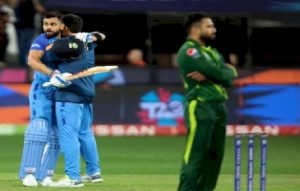 Few sporting rivalries match the passion of India-Pakistan and the atmosphere was electric as Pakistan got off to a stuttering start after being sent in to bat with Captain Babar Azam out lbw for a golden duck to Arshdeep Singh.
Singh’s swing caused more carnage in his next over when Mohammad Rizwan (four) top-edged a rising ball to Bhuvneshwar Kumar at fine leg.

Shan Masood survived a narrow run-out appeal as he and Iftikhar Ahmed worked to rebuild the innings.

They reached 60-2 at the halfway mark then Ahmed flicked a switch when the slow bowlers came on, hitting Ravi Ashwin for six then plundering three more in one over from Axar Patel.

Ahmed reached his half-century before Mohammed Shami trapped him lbw, sparking a collapse with Pandya snaring Shadab Khan, Haider Ali and Mohammad Nawaz in the space of 19 runs. A late flourish took Pakistan to a par 159.

India also had a horror start with KL Rahul out in the second over to Naseem Shah, dragging the ball onto his stumps. Ahmed then took a blinding catch at slip to remove skipper Rohit Sharma (four) off Haris Rauf.

Suryakumar Yadav, arguably the best T20 batsman in the world, lasted just eight balls, caught behind for a 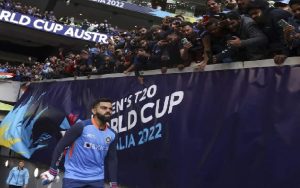 whirlwind 16 off Rauf as the Pakistan fans roared in celebration.

When Patel was run out in the next over, India were reeling at 31-4.

Kohli started slowly but finally found his groove and with Pandya started launching a fightback, hitting three sixes in one over off Nawaz.

With 28 needed off eight balls, Kohli smashed two sixes off Haris Rauf to leave 16 from the final over.

Pakistan’s Mohammad Nawaz had a final over to forget, gifting India two wides and a no-ball that went for six before Ashwin coolly blasted over mid-off as India chased down 160 for victory.

“I honestly have no words. I have no idea how that happened. Hardik(Pandya) kept telling me, just believe we can stay till the end. I’m lost for words,” said Kohli.

Share
Previous RAHUL GHANDHI SAID HIS BHARAT JODO YATRA MEAN TO PROTECT INTEGRITY OF THE COUNTRY NOBODY CANNOT STOP IT
Next BJP has caught fear of KCR; Harish Rao