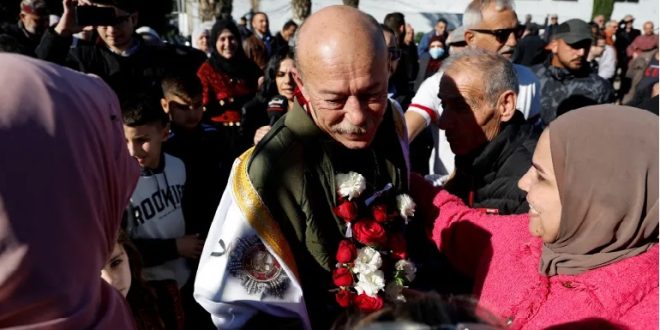 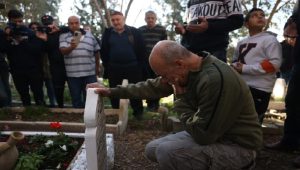 Maher, 65, was released from Eshel prison near Beer Sabe’ (Beer Sheva) in southern Israel just before 7am (04:00 GMT) on Thursday.

He was arrested in 1983 and convicted alongside his cousin, Karim Younis, in Israeli courts of killing an Israeli soldier in Syria’s Israeli-occupied Golan Heights in 1980.

Karim, released two weeks ago, was the longest serving Palestinian prisoner, having been arrested earlier than Maher.

The cousins are from the Palestinian village of Ara in Israel, where large crowds of relatives and friends greeted Maher on Thursday.

Upon his release, Maher visited the grave of his father, who died in 2008. His mother showered him with petals when he arrived at his home, where he was arrested at 25.

She told media before his son’s arrival that she would not cry but would spend every moment celebrating.

Maher and Karim were originally sentenced to death by hanging. Their sentence was changed to life in prison, which was then commuted to 40 years in 2011. 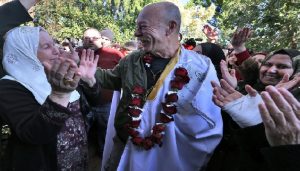 Dozens of Israeli police, who had warned people in Ara against holding any kind of celebration for days before his release, surrounded the house on Thursday morning.

The Palestinian flag was not allowed to be raised, according to new orders banning it in public by Itamar Ben-Gvir, who was recently appointed National Security Minister under a new right-wing government led by Prime Minister Benjamin Netanyahu.

While the vast majority of Palestinian prisoners in Israeli jails are from the occupied West Bank, the Younis cousins are Palestinian citizens of Israel.

Ministers in Israel’s new government have been pushing for harsher measures against Palestinians in Israel and in occupied East Jerusalem who have carried out attacks in which Jewish Israelis are killed, such as revocation of residency and citizenship.

A heated exchange took place last week about the issue when a far-right minister said she “prefers Jewish murderers over Arab murderers”.

About 4,700 Palestinians are being held in Israeli prisons, including 150 children and 835 people held without trial or charge. 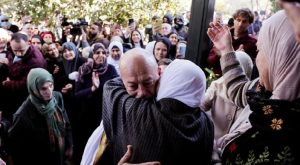 On the same day, the Israeli army has shot dead two Palestinian men during a raid on Jenin, bringing the number of Palestinians killed by Israeli forces in the occupied West Bank in January to 17.

Jawad Fareed Bawaqneh, a 57-year-old father of six and teacher at a local school, was killed on Thursday morning in the Jenin refugee camp, local journalists told media, as well as Adham Jabareen, a 28-year-old fighter with the Jenin Brigades armed resistance group.

The Palestinian Ministry of Health confirmed the names and ages of the deceased men at 7am (04:00 GMT).

Local journalist and resident Mujahed al-Saadi, who spoke to witnesses, told media that Bawaqneh, the teacher, was killed on the street in front of his home as he was attempting to help Jabareen after the latter had been shot.

“The teacher was killed when the resistance fighter was injured under his house Bawaqneh went to bring Adham into his house to give him treatment, when the sniper shot him directly in the chest,” al-Saadi said.

Bawaqneh’s son, who was present at the scene, described the killing in a TV interview as an “execution”. (Int’l Monitoring Desk)

Share
Previous US arrests Russian crypto boss for alleged criminal ‘haven’
Next US, Germany head for showdown over tanks for Ukraine