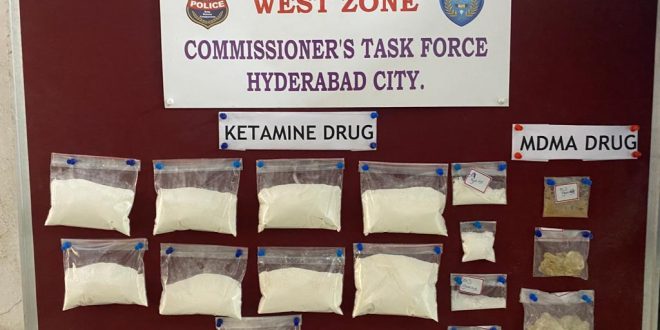 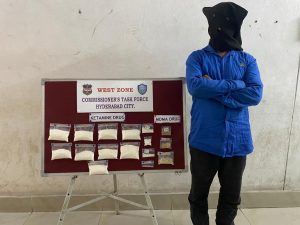 The sleuths of Commissioner’s Task Force, West Zone team, Hyderabad apprehended (01) interstate Drug offender, who was found in possession of Narcotic substance/Drug i.e. MDMA and Ketamine in order to deliver the same to needy customers at Hyderabad. Seized (53) grams of MDMA & (850) grams of Ketamine from his possession

Brief about the Accused person:-

Mohd Shabeer Ali @ Sudeep Biswas is native of Mandalpara(v), 24 North Parganas(Di), West Bengal State . He completed his intermediate from Bankim Chandra Chatterjee collage. Thereafter, in the year of 2007, he joined the Calcutta University and completed Ayurvedic course. In the year of 2009, he came to Hyderabad for eking his livelihood and practice with one Dentist doctor by name Dilip kumar for three months at Gowliguda , Hyderabad. Thereafter, presently, he runs the own clinic styled as “Perfect Dental & Piles clinic Near SBI Bank, Chandrangutta, Hyderabad. In the year of 2009, he married and having two daughter & one son.

Accused earnings aren’t sufficient to full his lavish life. Accused hatched plan to intended to sell the drug to needy customers in his clinic and earn easy money. To procuring drugs, he started searching Ketamine & MDMA Drug on website “India Mart”. There, one person by name Shiva R/o. Chennai, came into contact and introduced himself as drug peddler and given assurance to supply drug. Accused transferred the amount of Rs. 30,000/- through SBI Vide Account No. 003100050338738 on 16-07-2022. After a week accused got deliver 53 grams of MDMA Drugs through Blue dart Courier at Santosh nagar, Hyderabad. He tried to sell the same drug but no one customer showing interest in that. Thereafter, he went to Malkangiri Village, Orissa State and purchased the 850 grams of Ketamine Drugs from Kaku for Rs.12,000,00/- .

Today i..e, on 12-01-2023, on a tip off , apprehended the accused at Perfect Smile & Pile clinic and seized the MDMA and Ketamine Drugs from his possession.

The accused persons along with seized material being handed over to SHO, Chandrangutta for further action.