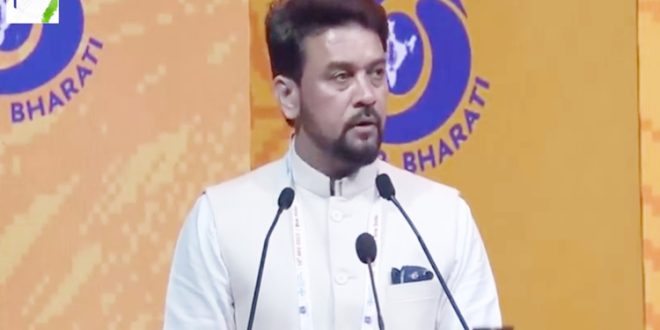 New Delhi’Nov 29 2022′(PIB) Information and Broadcasting Minister Anurag Singh Thakur said that the country’s public broadcasters All India Radio and Doordarshan have always stood by the truth and won people’s trust over the years.

Speaking at the inaugural session of the 59th Asia Pacific Broadcasting Union (ABU) General Assembly and Associated Meeting 2022 in New Delhi today, Mr Thakur said, the media make a deep impact on people’s decision-making process, hence accuracy should be a priority in the minds of communicators than the speed.

The Minister also underlined that during the COVID pandemic the government had to establish a fact-check unit to counter all the unverified claims circulated in the mainstream media.

Mr Thakur also appreciated AIR and DD for institutionalising their mechanism to check facts before going to the masses. He said that the Prasar Bharati had lost over 100 employees in COVID but it didn’t deter them from continuing. The Minister underlined that during the pandemic there was another challenge of infodemic.

Mr. Thakur said that programs like ABU facilitates Indian media to interact and learn from the outer world to overcome such challenges and advance the interest of broadcasting globally.

Prasar Bharati CEO Gaurav Dwivedi said that this year’s theme of ABU General Assembly, Serving the People: Media’s Role in Times of Crisis is very apt especially after facing a crisis like COVID.  He also hoped for a valuable outcome from the event.

Prasar Bharati is hosting the ABU General Assembly this year. The event coincides with Azadi Ka Amrit Mahotsav to mark the 75th year of India’s Independence.

The ABU is a nonprofit, professional association of the broadcasting organizations of Asia and pacific region. The conference is expected to strengthen relations with Foreign Broadcasters, particularly from ASEAN countries, thus favoring the Act East Policy of the Government.