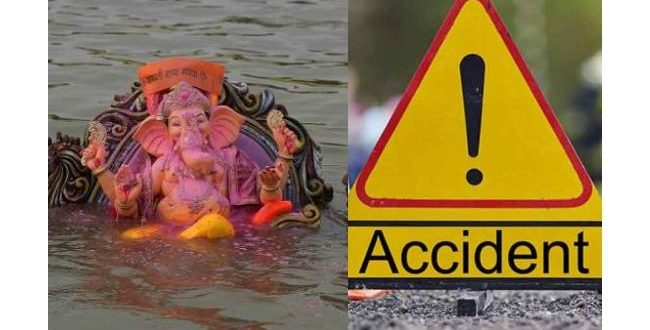 Hyderabad’10 sep-In a very tragic incident, a man fell down from the vehicle while returning home after immersing a Ganesh idol in the early hours of Saturday. The man was identified as Jai Sai, a native of Shalibanda of Hyderabad. The accident took place near Cherma’s which falls under Abids Police Station.

According to the police, the man fell down from the vehicle accidentally and got crushed under the rear wheel. He died on the spot. The police who received the information immediately reached the spot and shifted the body to Osmania Hospital for postmortem.

The festival, Ganesh Chaturthi ended on Saturday. Lord Ganesh’s idols are being immersed in water. Telangana govt has declared a holiday on Friday for govt offices/educational institutes in Hyderabad and Secunderabad, Ranga Reddy, and Medchal-Malkajgiri districts.

The tight security arrangements are in place for the Ganesh immersion processions. More than 25,000 policemen have been deployed within the limits of three police commissionerates of Hyderabad, Cyberabad, and Rachakonda