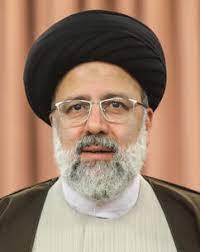 Iran, Aqai Sayyid Ali Khamenei madazilla-ul-Aali in a television address to the Iranian people on the occasion of the recent 13th presidential election in Iran the “Islamic system is based on the two foundations of democracy and Islamism. And democracy is achieved with the full participation of the people”. Took part in the election held today and the result came today in which Hujjat-ul-Islam wal-Muslimeen elected Aqai Syed Ibrahim Raeesi as the eighth President of the Islamic Republic of Iran.

In last Moulana Ali Hyder Farishta President Majama-e- Olama and the members of the Assembly of Scholars and Sermons, Hyderabad Deccan (Telangana), India, pray for the health and safety of Hujjat-ul-Islam and Muslemeen Aqai Syed Ibrahim Raeesi, and hope that in the presence of Wali-e- Asra.t.f during your presidency Under the shadow Islamic system to the Iranian people and the government and the Muslim Ummah will be provided maximum means and opportunities for development and stability. (Press Media of India).