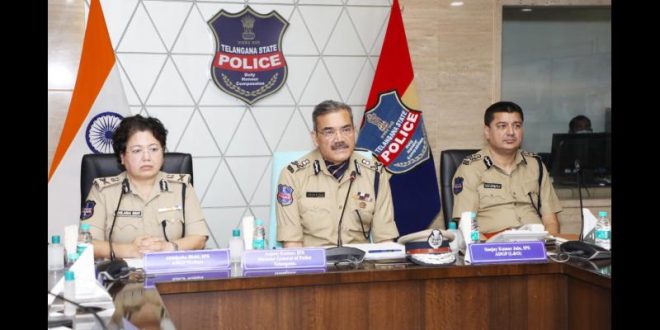 Hyderabad, Jan.17 (PMI):The prestigious G-20 group meetings will be held here from January 28. They will be held till June 17 this year.

State DGP Anjani Kumar held a high level review meeting to take stock of security arrangements being made for holding the meetings in the State capital. Speaking on the occasion, Anjani Kumar said it was decided to make the organisation of the meetings a grand success in the city by working in close coordination. He said the meetings would be held under the leadership of Prime Minister Narendra Modi in the country and added that the first meeting would be held on January 28.

He directed Hyderabad and Cyberabad police commissioners to make extensive arrangements mainly at the airport, hotels where the delegates stay and meeting areas and also to set up special control rooms in the city and at the airport. Senior police officers of the state, Airport Authority of India, Regional Passport Office, NDRF, SRDF, CISF, NSG and other security related departments, also participated in the meeting.

The G-20 Security Coordination Committee under the chairmanship of Anjani Kumar has decided to work in tandem for the successful conduct of the  prestigious G-20 Working Group meetings.

Anjani Kumar said the subsequent meetings would be held on March 6 and 7, April 26, 27 and 28, May 7, 8 and 9 and June 15, 16 and 17 this year. He said ministers, secretaries, joint secretaries and the representatives of NGOs would take part in the meeting and added that the coordination between all concerned departments was necessary to make the meetings a a grand success. He asked the officials to make requisite arrangements at all the tourist places to be visited by the participants of the meeting. He asked the police officers to make full proof arrangements at all hotels and Shamshabad international airport during the organisation of the meeting. (PM)