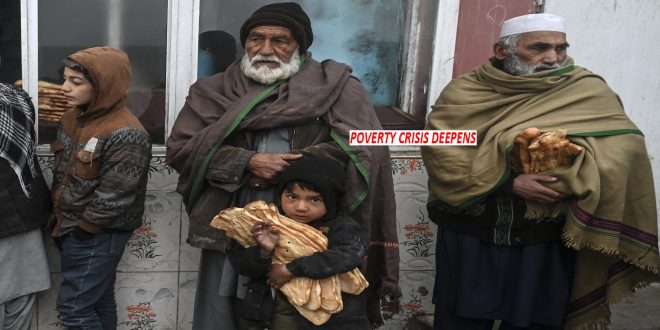 KABUL/ ISLAMABAD: In the early hours of each morning, Muhajira rushes in freezing 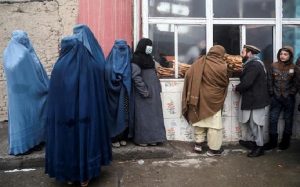 temperatures to a modest bakery in the Afghan capital to wait for warm naan to be distributed.

On some days, it is all her family, and the others who have joined the queue will eat for the day.

“If I don’t bring bread from here, we will go to bed hungry,” the mother of two Muhajira Amanullah told media on Tuesday.

“I even thought of selling my daughters, but I backed down and relied on God alone.”

Afghanistan is in the grip of a humanitarian disaster, worsened by the Taliban takeover in August, when Western countries froze international aid and access to assets held abroad.

Jobs have dried up and many government workers have not been paid for months in the country, 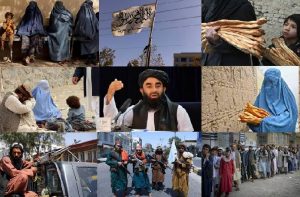 which was almost entirely dependent on foreign donations under the previous US-backed government.

The United Nations has warned that half the country is threatened with food shortages.

The bread distribution launched on Saturday is part of the Save Afghans From Hunger campaign organised by a Kabul university professor.

At least 75 families in seven districts of the capital, currently blanketed in snow, will receive daily naan rations for a month.

In the queue, Nouriya stands alongside five other women, all in the blue burqa that the Taliban encourages women in the country to wear.

After the death of her husband, she got handouts from friends, but that has ended. 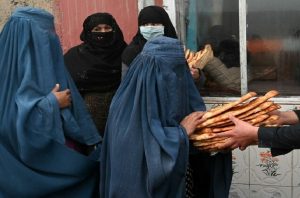 “We eat rice or soup made with carrots and turnips… and we put pieces of bread in it instead of meat,” said Nouriya, a mother of five.

While men and women wait for their share of bread, children play, some wearing tattered shoes too big for them.

As the last person left the bakery, owner Makram El-Din said: “People have lost their jobs, and they no longer have any income. We used to use four sacks of flour a day, now we only use one and a half.”