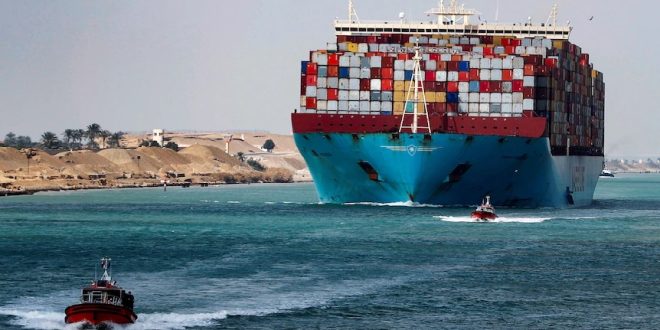 Cargo vessel refloated after running aground in Suez Canal

CAIRO: A cargo vessel that ran aground in Egypt’s Suez Canal has been refloated, the Suez Canal Authority and a canal services firm said. 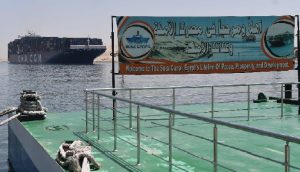 Leth Agencies said the MV Glory ran aground on Monday near the city of Qantara, in the Suez Canal governorate of Ismailia. The Norwegian shipping agency said canal tugs had refloated the vessel.

Suez Canal Authority (SCA) Chairman Osama Rabie told the Al-Arabiya news outlet that traffic in the canal, one of the world’s main shipping arteries, was unaffected by the grounding of the ship.

Rabie also confirmed that the ship had run aground.

Leth Agencies said minor delays were to be expected after the ship was refloated.

Officials had no details on what caused the vessel to run aground. Parts of Egypt, including its northern governorates, experienced a wave of bad weather on Sunday.

Satellite tracking data analyzed by The Associated Press news agency showed the MV Glory in a single-lane stretch of the Suez Canal just south of Port Said on the Mediterranean Sea. MV Glory is not the first vessel to run aground in the crucial waterway. The Panama-flagged Ever Given, a colossal container ship, crashed into a bank on a single-lane stretch of the canal in March 2021, blocking the waterway for six days. The 400-metre (1,310-foot) vessel was loaded with about 18,300 containers. 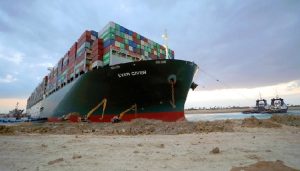 The Ever Given was freed in a massive salvage operation by a flotilla of tugboats. The blockage created a huge traffic jam that held up $9bn a day in global trade and strained supply chains already burdened by the COVID-19 pandemic.

The Joint Coordination Center in Istanbul listed the MV Glory as carrying more than 65,000 metric tonnes of corn from Ukraine bound for China.

The MV Glory was inspected by the Joint Coordination Center on January 3. The centre includes Russian, Turkish, Ukrainian and United Nations staffers.

Opened in 1869, the Suez Canal provides a crucial link for oil, natural gas and cargo. It also remains one of Egypt’s top foreign currency earners.

In 2015, the government of President Abdel Fattah el-Sisi completed a substantial expansion of the canal, allowing it to accommodate the world’s largest vessels.

The Ever Given, one of the world’s largest container ships, resumed its journey to leave the Suez Canal on 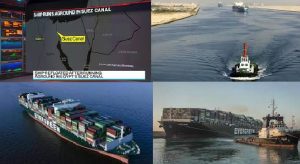 Wednesday, 106 days after becoming wedged across a southern section of the waterway for nearly a week and disrupting global trade.

The development came after its Japanese owner, Shoei Kisen Kaisha Ltd, reached a settlement with canal authorities over a compensation amount following weeks of negotiations and a court standoff.

The Suez Canal Authority says it has reached an agreement to settle a financial dispute with the owners of a hulking container ship that blocked the crucial waterway in Egypt for nearly a week earlier this year.

The authority did not reveal details on the settlement deal with the Shoei Kisen Kaisha Ltd., the Japanese owner of the Ever Given. It said the deal will be signed in a ceremony in the Suez Canal city of Ismailia on Wednesday.

The vessel would be also freed Wednesday, it said.

“Preparations for the release of the vessel will be made and an event marking the agreement will be held at the Authority’s headquarters in Ismailia in due course,” Faz Peermohamed of Stann Marine, which represents owner Shoei Kisen and its insurers, said in a statement on Sunday, without providing details of the settlement. (Int’l News Desk)