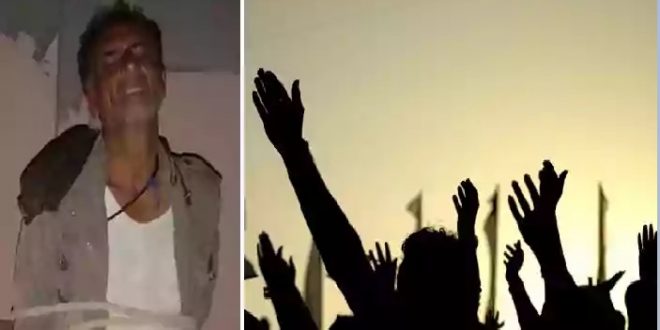 Another brutal murder in Pakistan over blasphemy allegation

KHANEWAL/ LAHORE: A mob has lynched a man in a remote region of Pakistan’s Punjab province after he was accused of burning pages of the Quran, the Muslim holy book, the police and officials said. 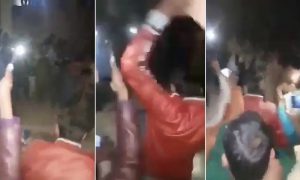 Dozens of people have been detained and arrested over the lynching, which happened on Saturday evening in Khanewal district of Punjab province, according to Tahir Ashrafi, the prime minister’s special representative on religious harmony. Law enforcement agencies are also monitoring hundreds of other suspects, he said.

Police in Punjab province said at least 15 primary suspects have been arrested in connection with the case. They added that 85 other accused had been detained and raids were being conducted to arrest more suspects.

Prime Minister Imran Khan ordered action on Sunday against the mob and any police who acted as onlookers to the killing.

“The lynching will be dealt with full severity of the law. We have zero tolerance for anyone taking the law into their own hands,” he said in a statement.

Khan said on Twitter he had asked Punjab officials for a “report on action taken against perpetrators of the lynching… & against the police who failed in their duty”. 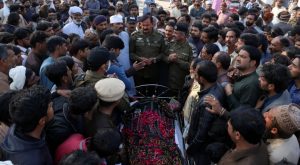 The killing came just over two months after a Sri Lankan factory manager was beaten to death and set ablaze by a mob over blasphemy in Sialkot city, also in Punjab.

The mob gathered at a mosque on Saturday night after the son of its prayer leader announced that he had spotted the man burning pages of the holy book, police official Munawar Hussain told media.

Police arrived to find the man unconscious and tied to a tree, Hussain said, adding that the mob also attacked the police.

“The villagers armed with batons, axes and iron rods killed him and hanged his body from a tree,” Hussain said.

He said that evidence so far gathered by police suggested the dead man, identified as Muhammad Mushtaq, was in his 50s and appeared to have had mental disabilities. 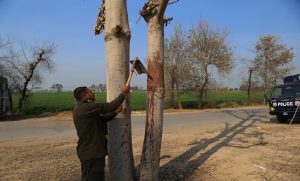 “Who could possibly justify the barbaric act of stoning to death a mentally ill person?” Ashrafi, the prime minister’s special representative, told a televised press conference in Khanewal district.

“The man’s family say that he was mentally ill and his mental health wasn’t right for the past 10 to 15 years.

“This is not the religion of my Prophet, to kill people under your own interpretation of religion,” he said.

“Punjab government must immediately take action against the police that watched it happen and the perpetrators. Laws exist, the police must enforce these laws and not allow mobs to rule the day,” she tweeted.

Mob killings over accusations of blasphemy – a crime that can carry the death sentence are fairly frequent in Pakistan, home to 200 million people, mostly Muslims. 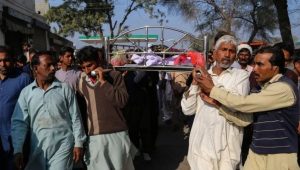 Rights groups say accusations of blasphemy can often be wielded to settle personal vendettas, with minorities largely the target.

Prime Minister Khan, who has condemned vigilante crimes in the past, had said that lynching the Sri Lankan man brought shame on the country. Dozens of people have been arrested in connection with the case that caused global outrage.

In April 2017 an angry mob killed university student Mashal Khan when he was accused of posting blasphemous content online.

A Christian couple were lynched then burned in a kiln in Punjab in 2014, after being falsely accused of desecrating the Quran.