New Delhi’july 8,2022:As the situation in Amarnath yatra became critical after a cloudburst struck the area near the holy shrine leaving at least 13 dead, and 40 persons reported missing, the pilgrimage has been suspended till the situation returns to normal, officials said on Friday. 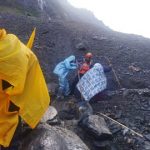 “Situation is under control, rains are still going on. Looking at the hazard level, the Amarnath Yatra has been halted temporarily due to the area being inundated. If the weather remains normal and makeshift arrangements are made, then the yatra can be resumed tomorrow,” said ITBP spokesperson Vivek Kumar Pandey.

After a cloudburst incident was reported near the holy cave area of Amarnath which have claimed at least ten lives so far, Union Home minister Amit Shah took note of the situation and said saving the lives of people was on priority.

The home minister also had a word with the Lieutenant Governor of Jammu and Kashmir, Manoj Sinha and said the rescue was underway. “I have spoken with Jammu and Kashmir LG Manoj Sinha pertaining to flash floods triggered by a cloudburst at Amarnath Cave. NDRF, SDRF, BSF & local admin are doing the rescue work. Our priority is to save the lives of people,” tweeted Shah.

Vivek Kumar Pandey said “the Amarnath Yatra has been suspended till the situation turned normal. Likely to be resume by tomorrow.”

The Disaster Management Authority of Jammu and Kashmir reported at least 10 casualties.

Many officials on duty have shared the video of the flash floods at the cave on Twitter. One of the videos widely shared is below: 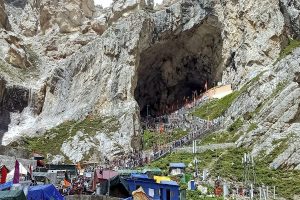 A cloudburst incident took place at the holy cave area of Amarnath on Friday which resulted in a heavy discharge of water in the ‘Nullah’, adjoining the holy cave.

According to the Indo-Tibetan Border Police (ITBP) officials, the cloud burst occurred at the lower holy cave (Amarnath) at around 5.30 PM and the rescue teams rushed to the spot.

Rescue and relief operation are continuing with the NDRF, SDRF and J&K Police teams in action and the priority being immediate shifting of injured to the base camp hospitals.

AHL helicopters have been pressed into service for evaccation of the injured,

Police said search operation is on to ascertain casualties.