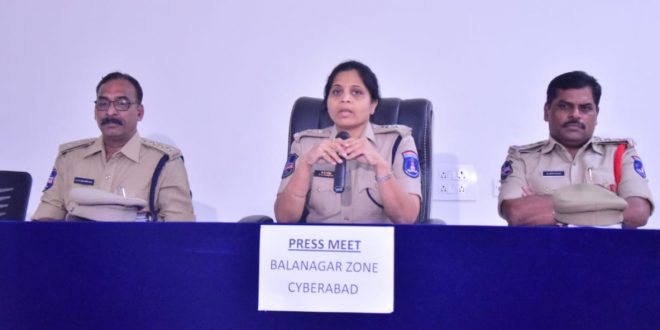 admin March 23, 2019 Crime, Top News Comments Off on Alwal Police Arrested the accused who involved in Heinous crime of Rape and Murder of a Minor Gir 1,567 Views

Alwal Police Arrested the accused who involved in Heinous crime of Rape and Murder of a Minor Girl aged 6 years in Cr. No. 124/2019 U/s 363, 376-A, 376 AB, 302 IPC & Sec 5 r/w 6 of POCSO ACT 2012.
Details of the accused: – Rajesh Kumar, S/o Lagan Sah, aged 20 years, Occ:_R/o Nandini Tent house, Bollaram, N/o ward No. 12 Lavkush ghat, Valmikinagar, Bhaisaloan, Valmikinagar, West Champaran, Bihar-845107.
Facts of the case are that on 21.03.2019 at 20:00 hours hrs the complainant Sri Cheguri. Chandram, S/o Shankaraiah, age: 35 yrs, Occ: Labour, R/o Near Railway Gate, Turkapally, Alwal Mandal, Medchal District came to PS and lodged a complaint stating that his daughter aged 6 years, studying LKG at Holy Angel High School left the house at about 3PM to play outside and she did return back so far. Thereafter on enquiry with neighbour the complainant came to know that she was seen playing till 3PM. The complainant searched for her at all known places, relatives, friends, etc., but, he could not get any useful information. Hence, he requested for necessary action.
Basing on the above complaint, the SHO Alwal PS registered a case under kidnapping as the missing girl was Minor.
Immediately SI Varaprasad and crime team rushed to the scene and started searching both sides of the railway track near the complainant’s house with the help of local people. Mean time one Shirish noticed the dead body of the said missing girl near the bushes and shouted. Upon which, the police along with the parents of the victim girl reached the scene and found the dead body with bleeding injuries on throat with half naked i.e. pant was removed and her private parts were ruptured. The brother of the victim by name prashanth informed that he was seen her sister going along with one unknown person who celebrated holi with their neighbours. Then, the neighbour Dharmendra singh was examined and he revealed that he organized a party in view of holi at his house and his brother-in-law Roshan along with accused Rajesh Kumar, Surendra and Subramanyam have attended the party. On that day at about 13:00 hours the accused Rajesh Kumar went to Kirana shop along with deceased elder brother and gave Rs. 5 for snacks at the shop and after that Rajesh had enjoyed by dancing with other friends at Dharmendra house. Further the accused Rajesh kumar also had some liquor. After that they noticed that the said Rajesh Kumar was found absent in between 3PM to 4.30 PM, later he joined with them at about 4.30PM.
Mean time accused Rajesh noticed the victim girl was playing with her brother in front of her house, the accused called her and took her towards Railway track. The accused crossed the track and the victim crossed the track through under bridge after that the accused took her to the distance of 20 feet from the Railway track and selected an uneven place where some bushes are covered. After that the accused laid her on the ground and removed her pant. Mean time the victim resisted him and upon which he forcibly raped her. Due to fear and pain, the victim moved her legs and hands and also started shouting due which the accused got irritated and took one iron wire piece which was kept with him while coming to scene and scratched on victim left side neck, mean time the victim tuned her head and caused a deep injury on the right side of throat and the accused continued forcible sex on her even she is suffering with injury. After that he came to know that the victim was died, then the accused fled away from the scene by throwing the wire piece at the scene.
The accused was apprehended on 22.03.2019 at 06:00 hours at his room at Krishna nagar colony Bollaram and brought to PS. On interrogation he confessed to have committed the offence. The weapon which was used in the commission of offence also recovered from the scene. The accused came to Hyderabad 2 months back and joined with Roshan who is his relative and belongs to same village. Roshan is a brother-in-law of Dharmendra who is neighbour to the complainant.
The case is being investigated by Sri. A.V.R Narsimha Rao, Asst. Commissioner of Police, Pet-Basheerabad Division, Cyberabad as it is heinous in nature with the assistance of M. Mattaiah, Inspector of Police, N. Shankar DI of Police, SI Varaprasad of Alwal PS and their team.