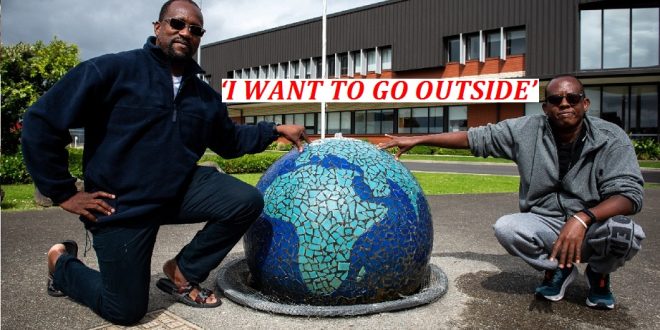 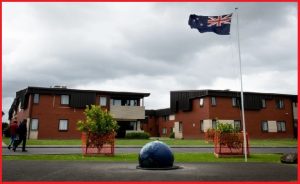 AUCKLAND/ MELBOURNE: After a nine-year ordeal in Australia’s immigration detention system, six refugees are preparing for a new life in New Zealand after being granted permanent residency.

The six are among more than 4,000 people who travelled to Australia by boat to seek asylum over the past decade and were sent instead to the remote Pacific island of Nauru as part of a hardline immigration policy operated by Australia.

New Zealand had offered to take some of the refugees as early as 2013, but it was only this year, after a new government was elected, that the plan finally went ahead.

“It is very, very amazing. I still don’t believe that I’m free. It seems like a dream,” said 39-year-old Jacques, who is originally from Cameroon and, like all the refugees who spoke to media, preferred not to give his full name.

Under the resettlement agreement between Australia and New Zealand, Jacques was transferred to the Mangere Refugee Resettlement Centre in Auckland on November 22 and finally began his new life last week.

“The first thing that came into my mind when I arrived here is, ‘I want to go outside,’” he told media on the eve of his release.

“I want to go out of the gate. I want to see people together and if they are playing football somewhere. I want to test if I am really free.” 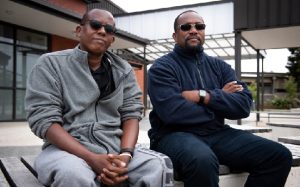 Australia’s immigration policies were transformed in 2001 after the rescue of hundreds of Afghan refugees from their sinking Indonesian fishing boat by a Norwegian freighter called the Tampa.

The incident prompted then-Prime Minister John Howard to announce asylum seekers arriving by boat would be processed in offshore detention centres, including Nauru and Papua New Guinea’s Manus Island, as part of what he called the “Pacific solution”.

The transfers stopped for a few years but resumed in 2012, and the government doubled down on the controversial policy a year later with the launch of the “military-led border security” policy known as Operation Sovereign Borders. No one in the group even if they were recognized as refugees would ever be allowed to settle in Australia, the government stressed.

The centres were closed in 2019 after long-running campaigns over the treatment of the refugees. The refugees have since lived within the community but without any formal visa or residency status. Some were brought to Australia under a short-lived medical evacuation program, where they are in immigration detention or allowed short-term visas with the proviso they look for a home in another country.

The New Zealand agreement offers an escape from the legal limbo and uncertainty that Amnesty International has described as “torture”.

The first group to arrive included Jacques, along with four Rohingya men from Myanmar and one Somali man. 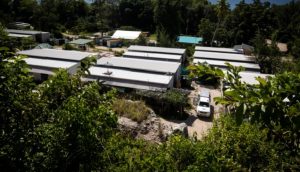 The men told media they had been interned in Nauru at a similar time and had spent more than nine years together.

“Everything is new for me here,” he said. “I had no opportunity back home. I could not vote there.”

The mostly Muslim Rohingya have been denied citizenship in their native Myanmar, and Noruhloq said he was not entitled to the right to vote, a passport or even a birth certificate.

His new residency status means he finally has official documentation and can claim basic rights under the law.

“This journey [as a refugee] was for documents. I did not have [documents] before. Now I have it in my hand, so it is a very good feeling,” he said.

Rohingya have suffered successive waves of persecution in Myanmar and have been the target of communal violence stoked by religious and racial hatred.

More than three quarters of a million Rohingya fled to neighboring Bangladesh after a brutal military crackdown in 2017 that is now the subject of a genocide trial at the International Court of Justice. Hundreds of thousands still live in squalid camps in Myanmar’s western state of Rakhine with severe restrictions on their movements. 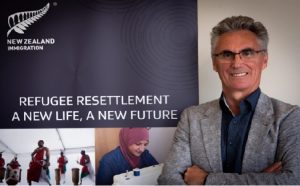 “This is a very happy moment for me,” 32-year-old Rohingya, Rahim, told media as he prepared for his new life in New Zealand.

“In my lifetime, I could not have any documents. I have been through [a lot of] hardship in my past. I don’t have any words to describe how happy I am.”

Rahim described the nine years he spent in detention on Nauru as a “trauma” during which he had “no hope.”

“Now we are free. I cannot explain how I feel,” he said.

“I don’t want to look back into the past life, because if I look back I will cry. I try to look forward to my life in a positive way. I try not to look back any more.”

New Zealand selects about 1,500 refugees for resettlement each year.

They are flown to the Mangere Refugee Resettlement Centre where they follow a five-week program designed to help them prepare for life in New Zealand and explain the support services available to them. 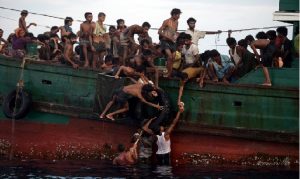 “While [refugees] are here, every language group is supported by interpreters,” Qemajl Murati, manager of the Refugee Quota Program for Immigration New Zealand told media.

“Once they go into the community, there are service providers contracted by us to support them for the next 12 months.”

While the agreement with Australia is a lifeline for people who have been held in places such as Nauru, critics say Canberra is shirking its international responsibilities by refusing to resettle the refugees who arrive by boat.

The resettlement offer by New Zealand was made in 2013 and only now acted upon, meaning the men languished on Nauru for nearly a decade longer than necessary.

“They’ve been held in appalling conditions and suffered terribly on Nauru,” he told media. 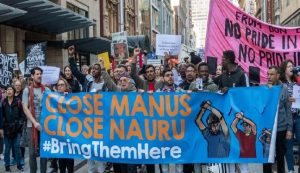 “To get somewhere where they can get permanent residency and get on with their life is why they attempted to get to Australia in the first place. So it’s a chance to begin the life that they should have been able to begin 10 years ago.”

Furthermore, the 150-person-a-year intake over three years agreed upon by New Zealand is part of the 1,500-person annual quota. This means resettlement places are being taken up by people who are arguably Australia’s responsibility.

Still, Australia’s Labor government has indicated it will continue offshore detention, with third-party resettlement not only to New Zealand but also to Canada and the United States.

In a statement provided to media, a spokesperson for Australia’s Department of Home Affairs said: “Regional processing and third country resettlement is a key pillar of Operation Sovereign Borders, and provides significant deterrence value to potential irregular immigrants.”

The United Nations’ special rapporteur on the human rights of migrants has described the legal limbo resulting from the policy as “punitive”, but Australia insists it has curbed people smuggling and potential deaths at sea because there is no hope of any of the asylum seekers being allowed to settle in Australia. 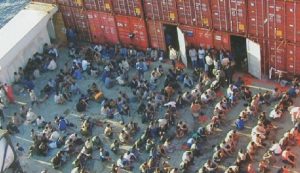 The Refugee Council of Australia says that, as of November 30, there were 92 people still on Nauru and about 105 people in Papua New Guinea. The medevac refugees will also be eligible for the New Zealand program, according to the United Nations refugee agency.

The UNHCR says it also agreed separately with New Zealand on a resettlement arrangement for eligible refugees in Papua New Guinea who were not covered as part of the Australia-New Zealand deal.

Mahmoud, from Somalia, told media he had spent exactly nine years and two days on Nauru.

The 34-year-old says that he is ready to start his new life in New Zealand and to “give all the good to the community”, but that his thoughts remain with the dozens who remain on Nauru.

He hopes they will soon be joining them in New Zealand.

“To stay one day on Nauru is very hard. It is not easy. We ask the government of New Zealand and the UNHCR to make this process very quick,” he said.