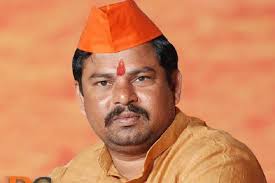 As per reports, the police have booked Goshamahal BJP MLA  for making derogatory comments against Sufi Saint Hazrat Khwaja Moinuddin of Ajmer Rajasthan in a video. A resident of Kanchanbagh saw the video and filed the complaint, police said.

Section 295A in The Indian Penal Code Reads as:   Deliberate and malicious acts, intended to outrage reli­gious feelings of any class by insulting its religion or reli­gious beliefs.—Whoever, with the deliberate and malicious intention of outraging the religious feelings of any class of 273 [citizens of India], 274 [by words, either spoken or written, or by signs or by visible representations or otherwise], insults or attempts to insult the religion or the religious beliefs of that class, shall be punished with imprisonment of either description for a term which may extend to 4[three years], or with fine, or with both.]

In another instance, BJP MLA Raghunandan Rao of the Dubbaka assembly constituency was booked by the Abids police on charges of revealing the identity of the Jubilee Hills gang-rape victim. He was booked under Section 228A of the Indian Penal Code, which pertains to the disclosure of the identity of the victim of certain offenses.

It may be recollected that the BJP MLA in a press meet held last week had shown a video and a photograph of the minor girl with accused youngsters. The MLA who is a lawyer himself, while showing the clip and picture stated that he was sharing them while claiming that it was proof of AIMIM MLA’s son’s presence in the car along with the victim. The video clip was shared on social media. The MLA was severely criticized for making the identity of the victim public. Two YouTubers and a journalist named Subhani were also booked for sharing the video clips.