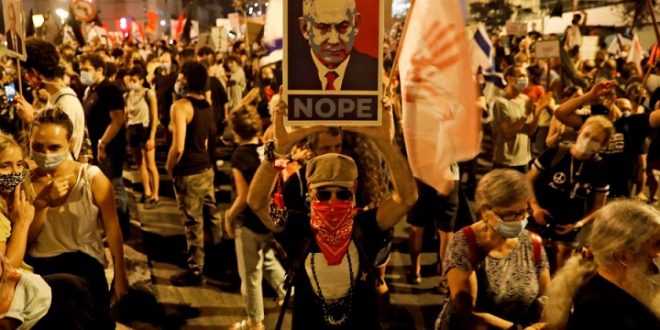 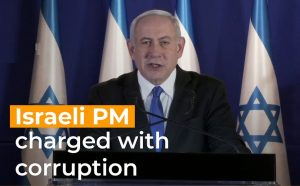 JERUSALEM: Protest, now on its 15th week, keeps pressure on prime minister to quit over alleged corruption and his handling of pandemic.

Thousands of Israelis have protested across the country for the 15th week in a row, flouting a new law meant to curb anti-government demonstrations during a coronavirus lockdown.

The street protests on Saturday and into Sunday, just three days after parliament approved an edict to limit the scope of such demonstrations, kept pressure on Prime Minister Benjamin Netanyahu to resign for his handling of the coronavirus crisis, as well as allegations of corruption, which he denies.

Netanyahu is on trial for bribery, fraud and breach of trust. He has denied wrongdoing.

Israeli law does not force a prime minister to step down after being indicted, sparking outrage and protests at a time when the country also grappled with the pandemic. 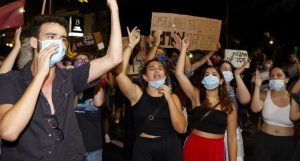 The new law bans Israelis from holding demonstrations more than one kilometre (about half a mile) from their homes and forces stricter social distancing, a measure the government said was aimed at curbing COVID-19 infections.

Critics have called it a blow to freedom of speech.

Most protests on Saturday night and into Sunday were small and scattered throughout the country, though a crowd of thousands gathered in Tel Aviv.

A small number of protesters scuffled with police and tried to block city streets.

Israel has shut down much of its economy and instructed people to stay within a kilometre of their homes whenever possible in an effort to contain a second-wave surge in coronavirus infections.

As of Sunday, Israel has recorded more than 264,000 infections, out of which more than 191,000 have recovered, while the death toll has hit almost 1,700 out of a population of nine million. (Int’l Monitoring Desk)