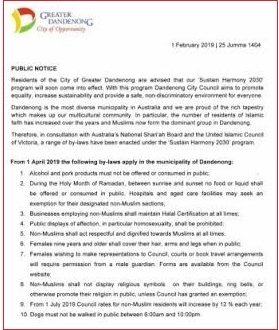 MELBOURNE: A supposed public notice circulating under council letterhead that “advises” residents that sharia law is being introduced locally has been uncovered as an offensive hoax.

The racist letters, which are mocked up to appear as though they come from the City of Dandenong, have been dropped into the mailboxes of residents in Melbourne’s south-east in the past few days.

Under the council’s logo, the sham letters falsely claim that a series of new “bylaws” are being introduced on April 1 due to the increased number of Muslims in the area.

The bogus bylaws include outlawing the consumption of pork and alcohol products in public and forcing girls and women over nine to cover their hair, arms, and legs.

“Residents of the City of Greater Dandenong are advised that our ‘Sustain Harmony 2030’ program will soon come into effect,” the letter says.

“With this program, Dandenong City Council aims to promote equality, increase sustainability and provide a safe, non-discriminatory environment for everyone.”

The letter claims that the bylaws are being introduced “in consultation with Australia’s National Shari’ah Board and the United Islamic Council of Victoria”. Neither organization exists.

Residents with questions about the laws are directed to contact the council’s “Committee for the Promotion of Virtue and the Prevention of Vice”, which does not exist – although it is the name of a Saudi government religious authority.

One recipient of the letter, who asked not to be named, said he was worried that some people in his area might think its contents were genuine.

“It got my hackles up, I think these kinds of tactics need to be outed,” the resident said.

“They need to have some light shed on them so we can discredit them.”

On its Facebook page, the City of Greater Dandenong said there was a fake public notice circulating on council letterhead.

“Please be advised this is not a council communication and we are investigating its source,” the council said.

“The letter contains offensive and misleading information. We do not wish to give this more attention as this is a fake letter (not authorized or distributed by Greater Dandenong City Council) and most definitely not in line with the views of Council.”