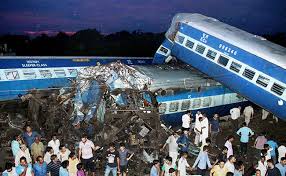 Hyderabad (PMI): Utkal Express 14 coaches derailed in Muzaffarnagar District of Uttar Pradesh last evening cause   killing at least in a latest news 24 people and about 400 people were injured. The Train was jumped near Khatauli Town around 1800 HRS last evening when it was coming from Puri in Odisha to Haridwar in Uttarakhand. The injured people were admitted in different Hospitals. The rescue and relief operation was carried out by the local administration and Railway personnel along with National Disaster Response Force and Provincial Armed Constabulary of State Police. The UP Railway Minister Suresh Prabhu took to twitter and informed about completion of rescue and relief work and commencement of restoration work. He also said that serious actions will be taken against those who found guilty

The Railways has announced an ex-gratia of 3 lakh 50,000 rupees each for the kin of those who lost their lives in the derailment. Fifty thousand rupees each for seriously injured and 25 thousand for minor injuries who have been injured.

President Ram Nath Kovind, Prime Minister Narendra Modi and Congress President Sonia Gandhi have expressed sadness over the incident. In a tweet, Mr Kovind said, his thoughts are with the deceased and their families. Mr Modi said, the Railway Ministry and the UP government are doing everything and providing all assistance required. Mrs Gandhi called upon party workers to provide assistance to the affected families. (Press Media of India)