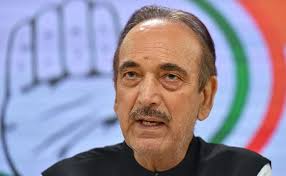 Hyderabad, Nov.5 (PMI): AICC leader Ghulam Nabi Azad on Tuesday alleged that the problem of unemployment had increased in the country during the BJP-led NDA government at the Centre. He said his party had held 650 protest programs at equal number of places across the country against the erratic policies of the Centre.
Addressing media persons at Gandhi Bhavan here, Ghulam Nabi Azad said Prime Minister Narendra Modi did not fulfill his promise of providing 10 crore jobs to the unemployment youth after coming into power in 2014. He also alleged that the Centre had cheated the poor people in the country by not depositing Rs 15 lakh in their bank accounts as promised by him before the 2014 elections.
Ghulam Nabi Azad said the problem of unemployment had doubled under the BJP rule. He also alleged that the Centre had taken the country backwards by creating economic slowdown and some 25,000 bank fraud cases were registered under the BJP rule as three lakh crore rupees were misused in the country under BJP rule. Azad alleged that the Centre was trying to close down the RBI as the Centre had borrowed Rs 4 lakh crore from RBI during the last four years. He dubbed the Modi government as anti-farmer, anti-youth an anti-poor people.
Commenting on the decision of the Union government not to join in RCEP,  Azad said it was victory of Congress as  it had mounted pressure on the ruling party to not join the program. He said protests would be held in Telangana State as Congress leaders remained united in the State. He said the Maharashtra issue would be taken care of by the Congress. He also paid rich tributes to Abdullapurmet Tahsildar Vijaya Reddy, who was burnt alive by a farmer in the city on Monday. He said the State government should take steps  to prevent such incidents in future. He also accused Chief Minister K Chandrashekhar Rao of not taking the 30-day strike seriously and ignoring the problems faced by 50,000 families of the corporation.