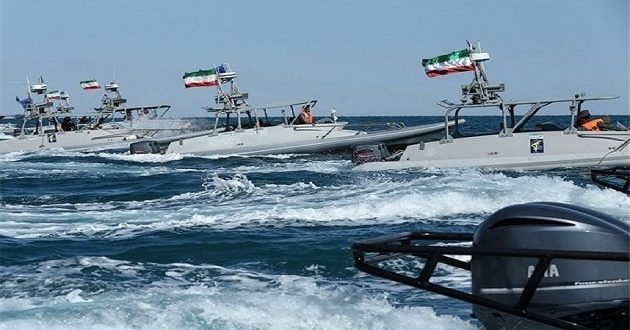 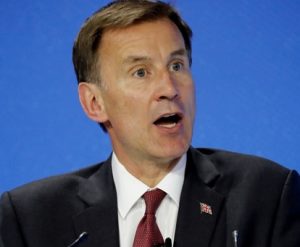 “We remain deeply concerned about Iran’s unacceptable actions which represent a clear challenge to international freedom of navigation,” a government spokeswoman said following an overnight meeting of the government’s COBRA emergencies committee to discuss the crisis.

“We have advised UK shipping to stay out of the area for an interim period.” 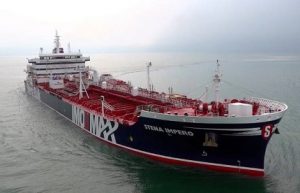 She noted comments by Foreign Secretary Jeremy Hunt earlier that “there will be serious consequences if the situation is not resolved.”

She added that there will be further meetings over the weekend and “we remain in close contact with our international partners.”

Hunt said on Saturday that he was worried that Iran had taken a “dangerous path” after it seized a British-flagged tanker on Friday.

“Yesterday’s action in Gulf shows worrying signs Iran may be choosing a dangerous path of illegal and destabilizing behavior after Gibraltar’s LEGAL detention of oil bound for Syria,” Hunt said on Twitter. 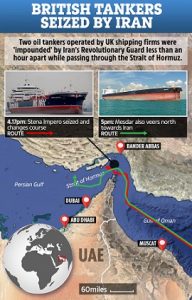 “As I said yesterday our reaction will be considered but robust. We have been trying to find a way to resolve Grace1 issue but WILL ensure the safety of our shipping.”

Iran analyst Majid Rafizadeh told Arab News: “Instead of acting as a rational state, Iran is becoming more aggressive and violent. Tehran is attempting to further destabilize the region in order to impose insecurity and fear and advance the regime’s revolutionary and parochial interests.

“The UK and other European governments must now focus their diplomatic efforts on countering the clear and present threat that aggressive Iranian behaviour across the region poses. It is time for the UK to move its efforts away from keeping the failing deal alive. It is time for Europe to switch off the life support for the JCPOA,” he added.

Iran’s seizure of a British-flagged oil tanker was allegedly due to a collision with an Iranian fishing boat, the country’s state-run IRNA news agency said Saturday.

Also on Saturday, the UK Foreign Office said it summoned Iranian Charge d’Affaires after the incident. 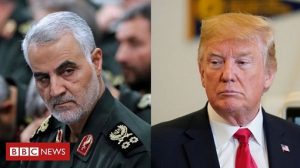 France and Germnay have expressed solidarity with Britain and has called on Iran to release tanker.

The British navy seized Iran’s Grace 1 tanker in Gibraltar on July 4 on suspicion of smuggling oil to Syria in breach of European Union sanctions.

Iran’s Islamic Revolutionary Guard Corps said on Friday it had seized the British-flagged Swedish-owned Stena Impero in the Strait of Hormuz for breaking “international maritime rules.”

Iranian authorities alleged Saturday the ship had collided with a fishing boat. It said the tanker was now at anchor off the port of Bandar Abbas with all its crew aboard. The Indian and Philippine governments said they were working to get Iran to release nationals from the two countries who were on board a British-flagged oil tanker seized by Iran in the Arabian Gulf. 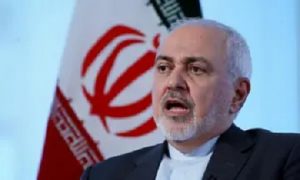 India’s foreign ministry spokesman, Raveesh Kumar, said Saturday its diplomats were “in touch with the Government of Iran to secure the early release and repatriation” of the 18 Indian crew members on the Stena Impero.

Manila’s Department of Foreign Affairs also said its ambassador to Tehran was in contact with Iranian authorities to ensure the lone Filipino crew member’s safety and immediate release.

Philippine Foreign Affairs Undersecretary Sarah Lou Arriola said there have been no reports of injuries among the crew.

Post Views: 29
2019-07-20
admin
Previous ‘CAT COME OUT OF BAG’…US to send troops to Saudia against Iran
Next Another Houthis drone attack on Saudi airbase