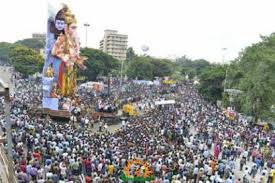 Hyderabad : Amidst chanting of thousands of excited devotees, the towering and one of the most popular idols Sri Chandikumara Ananta Padmanabha Maha Ganapathi of Khairatabad was immersed in the Hussain Sagar Lake this afternoon.

The 57-feet idol was the first to start towards the nearby lake at 7.30 am on Tuesday for the immersion. The huge procession befitting the size and popularity of the idol, wound its way through the streets of Hyderabad, with thousands thronging both sides of the road and atop buildings to have a glimpse of the mammoth idol. The authorities arranged special imported cranes and immersed Ganesh idol by 2 pm.

With reports making rounds that the Khairatabad Ganesh Utsav Samithi decided to go eco-friendly and shift to a clay idol from next year, thousands of devotees thronged the Hussain Sagar surroundings to have a glimpse of the gigantic idol. Earlier, hundreds of idols were immersed in the city lake till late this afternoon with lakhs of devotees intently watching the ceremony. Men, women and children watched with awe as the towering idol was being lowered into the lake with the help of a giant crane.

Amidst ecstatic devotees dancing to the drum beats and bhajans, Ganesh idols’ procession started at 8 am from various parts of the twin cities of Hyderabad and Secunderabad and reached Hussainsagar. Thousands of idols in different shapes and sizes were immersed in the lake from the designated spots.

The police ensured a smooth passage of the processions from various localities. The police made elaborate security arrangements for the peaceful conduct of Ganesh immersion procession.

On account of Ganesh immersion day, the State government declared holiday for government offices, schools and colleges in Hyderabad and Ranga Reddy districts. There was a little vehicular traffic on the city roads barring idols’ processions on the main procession route from 9am.

Hyderabad City Police Commissioner M Mahendar Reddy said over 26,000 police personnel drawn from Hyderabad Police, Telangana districts and also from Central para-military forces have been deployed for the purpose. The police heaved a sigh of relief as the Nimajjanam was peaceful and completed in a record time.

Emergency response teams were stationed at key locations on the route, the CP said, adding 310 hyper-sensitive and 605 sensitive places have been identified for which pickets have been posted. A total of 410 Mobile Parties moved in the area for smooth conduct of the Ganesh Festival, he said.

While 10,980 Ganesh idols were permitted to be installed at various public places last year, this year the figure was 11,094. The city security wing of Hyderabad City Police will deploy 23 bomb disposal teams, two access control teams at important Ganesh pandals and temples. 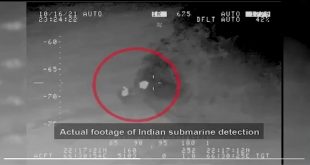