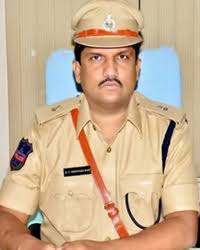 Srinivas Murder Not a Political One: SP Says—Nine Arrested

Nalgonda,   The police has solved  the case related to the murder of  the Nalgonda Municipal chairperson Boddupalli Laxmi’s husband Boddupalli Srinivas. The police produced nine culprits including A-1 Chintakuntla Rambabu. He said that all culprits were friends of deceased and made it clear that the murder was not a political one. The murder took place due to the friction taken place at a  Mirchi Bandi.
Speaking to the media here on Sunday, Nalgonda SP Srinivasarao said that the police filed cases against 11 persons in this regard and two culprits were at large. He said that A-2 was Mandra Mallesh, A-3 was Avula Sharathraju, A-4 was Bashapaka Durgaiah, A-5 was Kathula Chakri, A-6 was Ramunuri Satheesh, A-9 was Merugu Gopi, A-10 was Mathangi Mohan. He informed that A-7 Mandra Mahesh and A-8 Mittapalli Sai and A-11 Prasad were at large.
The SP said that nine cases were filed against Boddupalli Srinivas and hence the police didn’t provide gunmen as per rules. Reacting to a question, he said  Srinivas’s wife Boddupalli Laxmi didn’t ask for security and the interrogation was going on based on call-list. Making it clear that there was no other interference in the murder of Srinivas, he said that the police chased away the persons indulging  in quarrel  at the  Mirchi Bandi,  but the culprits again gathered at Mirchi Bandi after police left the place. The murder took place when Srinivas reproached the culprits with anger. The SP further said that the culprits have a feeling that Srinivas was neglecting them and was not extending any help to them though they were his friends.