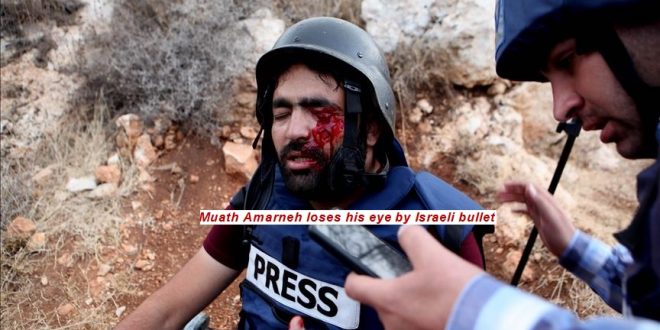 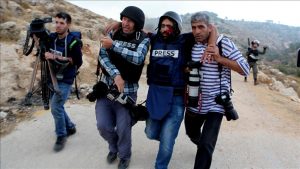 RAMALLAH/ JERUSALEM/ MELBOURNE: Thousands of social media users have taken part in a campaign to support Palestinian freelance journalist Muath Amarneh, who lost his eye after being wounded while covering a protest in the occupied West Bank last week.

Journalists from across the Arab world launched the campaign of solidarity after Amarneh was hit in the eye, apparently with a rubber bullet fired by Israeli forces who had arrived to quell the demonstrations last Friday in Surif.

As a result of the incident Amarneh lost one eye, posing a significant challenge to his career.

Israel’s border police said it did not target Amarneh at the protest near the city of Hebron and said it had used “nonlethal” means to disperse the crowd. 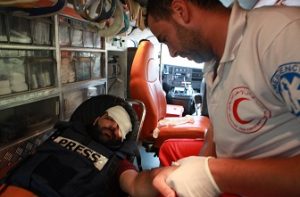 In a show of support, activists took photos of themselves covering an eye with one hand and posted them on social media, using the hashtags #MuathEye, or #EyeOfTruth.

Social media users from a variety of backgrounds – including teachers, students and youth organisations from dozens of countries across the world, ranging from the US to Malaysia, have joined the online movement.

The platform Days of Palestine also showed how students and teachers in the West Bank stood with Amarneh.

Mohamed Saif Zahir, the Vice President of the Maldives National Youth Council, is also among those who participated.

“When this story came up, I wanted to show my support for (Amarneh).” said Zahir. “There’s not much that can be done alone as a single person so I wanted to take part to add value to this cause.” 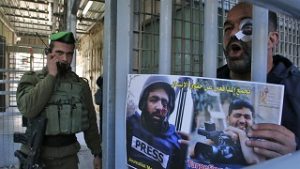 According to Yara Hawari, a senior policy fellow at the Al-Shabaka think tank, Amarneh’s story is among dozens of similar cases.

“The heavy price that Amarneh paid for being both a Palestinian and a journalist is not an anomaly. Indeed at least 60 Palestinian journalists have been targeted and injured from Israeli bullets this year,” she told Al Jazeera.

“Not to mention the mass targeted maiming of protestors at the Great March of Return in Gaza … Such brutality and violence will continue so long as the international community fails to hold Israel accountable for its violations.”

The Committee to Protect Journalists responded to the incident in an official statement, calling on Israeli officials to start an investigation to “hold the soldiers responsible to account”. 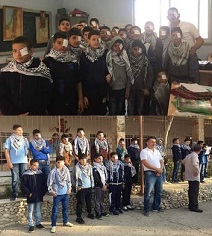 While the social media campaign has raised awareness of Amarneh’s story, many other journalists have been nursing injuries without the same attention.

Last year Attia Darweesh, a freelance news cameraman in Gaza, lost partial vision in one eye after he was hit with a tear gas canister fired by Israeli forces while covering demonstrations near the fence that separates Gaza from Israel. He has also suffered hearing difficulties after the incident.

“As a journalist, I can’t cover the same events anymore,” he told Al Jazeera. “I can’t be in crowded places like funerals. I have platinum implants in my face and any hit could affect me.”